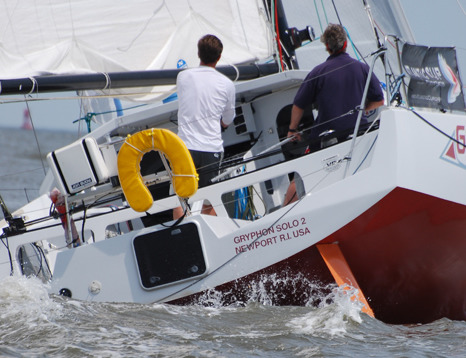 After 36 hours of sailing, the teams are not going to hear this, but I believe the race is just starting. The breeze has shifted from the fast reaching/running conditions the boats were enjoying to lighter upwind angles and as such the strategies are starting to change. As Sunday progressed it seemed like the eastern duo of #118 Bodacious Dream and #121 LeCoq Cuisine had closed the gap on earlier leader #54 Dragon. In fact Dragon tacked east in an attempt to cover but unfortunately lost distance, probably due to more current, and relinquished the top spot. The western pair of #112 Icarus and #90 40 Degrees immediately headed inshore and have actually been able to maintain their position relative to race leader Bodacious Dream.

All the boats seem to be on starboard tack heading towards Kitty Hawk and at this time the Bodacious Dream still has a slim lead over Icarus and 40 Degrees, followed by Lecoq Cuisine and Dragon, who after a close cross last night are virtually tied. The trailing pair of #106 Gryphon Solo and #39 Pleiad Racing have closed. Pleaid Racing might be making the most interesting move. During the course of the evening, they have positioned themselves furthest east and seem to have more speed than the lead group. Also, the weather has evolved (yet again) and I expect there to be more breeze further offshore. Could we see a situation similar to last year where the inside boats parked on the Parkway?
The teams are going to have a tough 24 hours as temperatures are expected to drop later this evening and there is expected to be a complete shutdown in the breeze that I don’t think can be avoided. With 250+ miles yet to sail, I still expect the offshore route to pay but the reality is, I dunno…. Thread here.