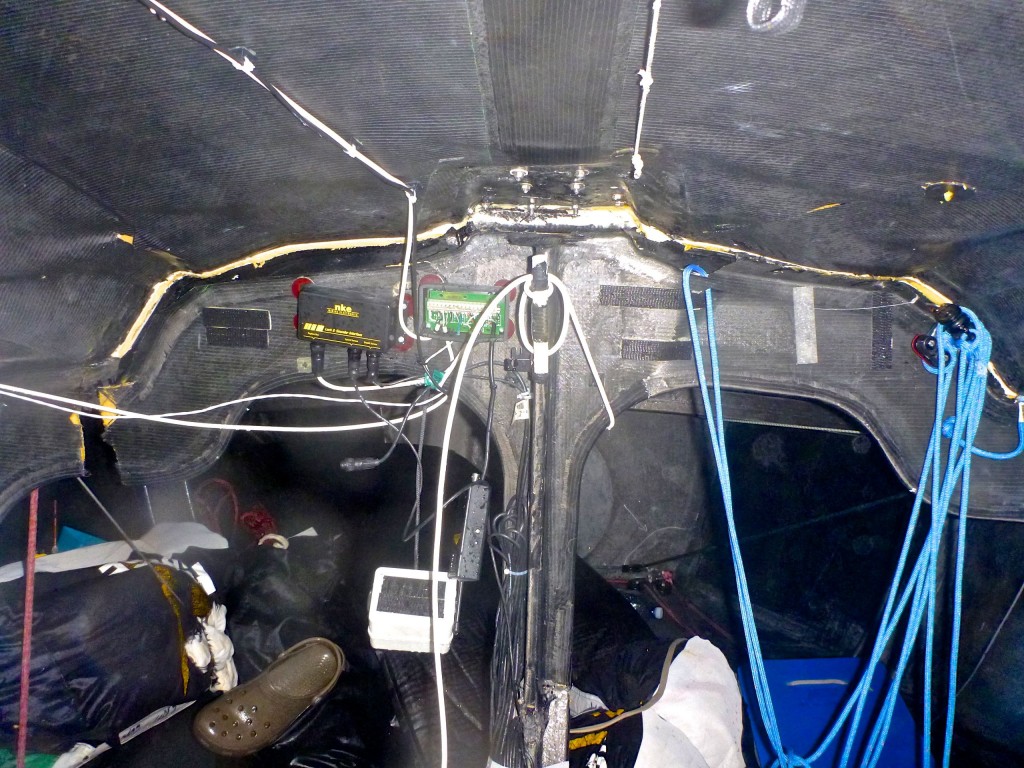 We are totally bummed about the incredibly bad incident that happened to Mini sailor Jeff McFarlane last Thursday during his 1,000 mile qualifier for the Mini Transat. We’ll have more soon, but this is pretty crazy. He’s lucky it didn’t turn out worse.

At 11:00 local time Jeff was almost half way through his 1,000 mile qualifying course, sailing with heavily reefed sails in 35 knots of wind when in quick succession the deck structure, keel box and mast failed. Expand the top photo to see the damage. Subsequently, the boat rolled twice, once laterally and then she cork-screwed. In this process the longitudinal structure that holds the keel box in place failed and crushed Jeff’s hand.

Jeff activated his EPIRB and tried to raise assistance from other vessels in the area to no avail. Being a single-handed sailor means that one needs to be self reliant and he proceeded to search through the interior of the vessel, which was in shambles. The flares which had been secured in the aft corner of the boat were found in the forward point of the boat. The life raft was wedged aft. He dragged it forward and placed it by the companion way.

With the safety items organized, Jeff proceeded to cut away the rig, saving pieces for a jury rig as well as well as working to tie the rudder at different angles to get the boat to maintain a somewhat straight drifting course.

As nightfall was nearing he had given up hope of rescue and was prepared to bail through the night in an attempt to keep the batteries from being completely swamped and loosing the ability to use the VHF. At this point, a Spanish Coast Guard helicopter flew over and Jeff agreed to abandon his vessel. Friday morning the vessel was located approximately 15 miles from the island of Menorca and the Coast Guard towed it to shore where it will be hauled and a determination made as to if the boat is salvageable. This will be critical in deciding if Jeff will need to postpone his dream of being the 1st American in over 30 years to win the fabled Mini-TransAt race. Read on.

You can donate to Jeff’s campaign to help him out in this tough go. SA just kicked in $500. Help a brother out.