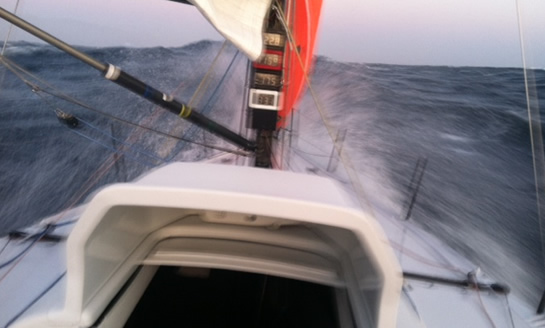 From the delivery anarchy files: So as if it wasn’t bad enough that the Newport to Cabo race sucked, the delivery home is even worse! It has blown like stink nearly the entire time, with big waves and just kicking the snot out of the boats coming home (the sled Maverick busted up a ring frame or two and had to turn back to Cabo), and of course there was this from last week.

But Ronnie Simpson on the R/P 45 Criminal Mischief sends this gem: We got 22 miles from Point Sur yesterday, but had to turn around because it was blowing 40+…Doing 22 under storm sails! But it wasn’t total hell  – we ran away from a 40 knot gale 3 days ago and surfed the day away at Santa Cruz Island 🙂

wind up for auction