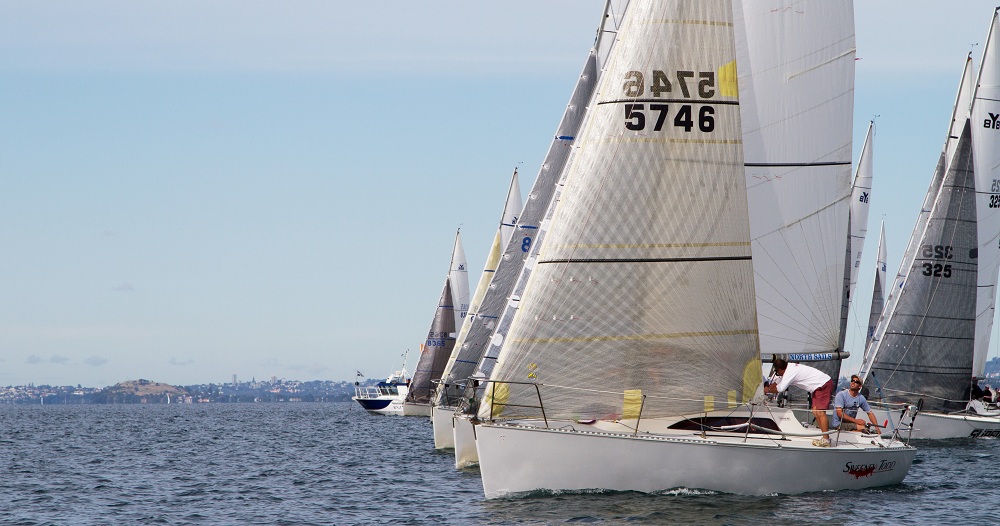 Doyle Sails had more racing success this weekend (13-14 April) with Flash Gordon, skippered by Mike Sanderson and his crew, taking first place at the 2013 Harken Young 88 Nationals. It was a triple victory for the loft, with Flash Gordon also taking the Tanaka Cup for first owner/driver and Sweeney Todd winning on Handicap.

The Flash Gordon crew sailed a very consistent regatta, with results of 2, 2, 3, 4, 4, 6=, to win with 21.5 points, by a margin of 18.5 points over second place. Flash Gordon features a full inventory of Doyle and Stratis sails and for this year’s campaign she had new generation of Main, #1 Genoa and Spinnaker all of which performed exceptionally well. Once again Doyle and Stratis proved themselves as the sail of choice for both performance and durability.

With little wind over the two days, racing was often a challenge, but a tactic of consistency paid dividends for the Flash Gordon team. “As expected the racing was incredibly tight, made even more so with never being over six knots of wind and massive shifts, so every boat had its turn at the front of the fleet” said Mike Sanderson, Head of Sales at Doyle Sails New Zealand and owner and skipper of Flash Gordon.

“Based on the forecast we identified before the regatta that it was very unlikely that we would do enough races for the “drop” to come into play, so our aim was to try and be top three in every race and not be on too many edges looking for wins. This along with conservative starts towards the middle of the line meant that we never lead a race, but were very rarely out of the top five. Our plan worked, we lead the regatta from race two and managed to finish it off with only having to start the final race to secure the regatta win.” Sanderson is full of praise for the crew of Flash Gordon: Richard Bouzaid, Phil Robertson, David Duff, Stu Molloy, Shaun Mason and Jono Nicholas.

Flash Gordon was joined by a strong fleet for the event, with 21 entries lining up to race. We are very proud of all the Doyle boats that raced, especially Flash Gordon (Mike Sanderson), Sweeney Todd (Vaughn Clark), Outrageous (Ross Masters), Sister Moonshine (Chris Steele), and Slipstream III (Nathan Williams) who all placed in the top 10. Many thanks must go to the organisers and race committee, and to all those who took part.

Shut Up and Drive