this is only a test

John Casey takes us inside his cat crazy world… 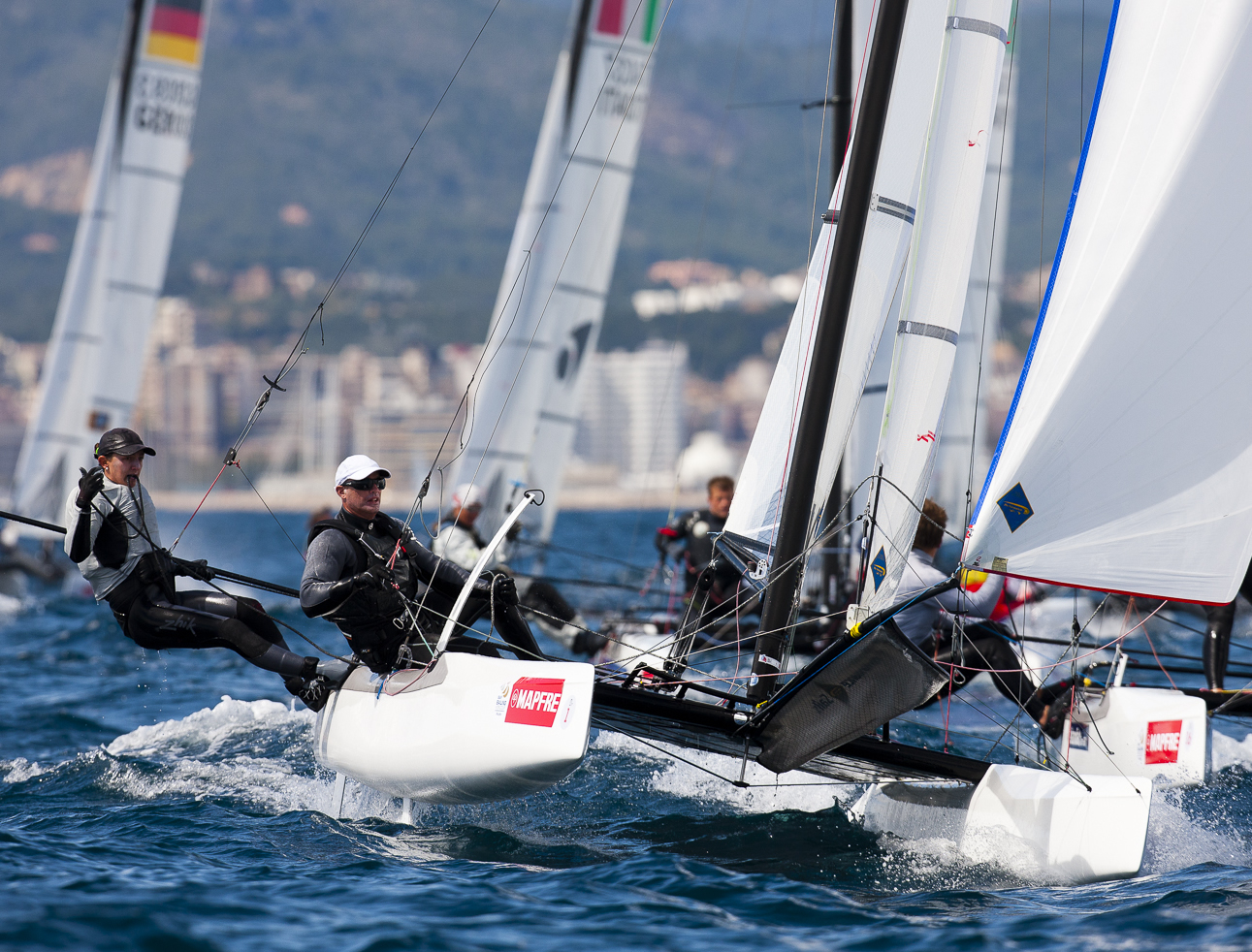 ISAF Sailing World Cup Palma was our first test against international competition in the 2016 Olympic quad. After picking up the new Nacra 17 in zero temps in The Netherlands, we took the long road south through the snowy roads of Antwerp and the multitude of toll booths of France. After the infamous 7-hour ferry ride from Barcelona to Palma de Mallorca, where I clutched my wallet quite tight from prying hands, we arrived at the damp beach of Club Maritimo San Antonio de la Playa.

The 17 is a one-design, but that didn’t keep us from spending days to make it our own with plenty of splices and continuous systems. Four days after arriving our Nacra 17 ‘Yeah Butt’ was ready to go. We were greeted the first couple days by a stiff 15+ knot offshore mountain breeze flowing over and around Serra de Tramuntana. It’s a little cooler than our home base of Miami for sure, but the sea state was pretty close to what we’ve trained in. Just as billed, the action was intense and close not only in that breeze but also in the lighter conditions of mid-week.

Since we received our Nacra 17 in January we’ve worked on and off the water quite hard with an emphasis on boatspeed. Our main goal for this event was to check in and see if what we’ve been working on south Florida was in the right direction. We were really pleased to find our boatspeed was on par with the top of the fleet in all conditions as we had relatively consistent scores (when our starts were on) in a very competitive fleet filled with some of the best sailors in the world. Of course, the multihull driven country of France had fast teams, as well as the Dutch, British, Swedish, Italians and Austrians.

In the end, our plan of checking in worked. We made the medal race, left so many points on the table, and now we know exactly what we have to improve on going forward. We’ll do this with a combination of domestic training. To keep out minds open, we’ll also head overseas to team with other countries.

What’s impressive is all the work that goes into Olympic sailing. I’m personally enjoying all the technical aspects the US Team is implementing this quad, and we’re focused on developing a very strong multihull team. We have a strong plan.

We won’t go to the World Cup in Hyeres so we’ll lose our #1 ranking, but we accomplished what we wanted during our short European trip. I really want to thank Oakcliff Sailing Center for providing us with a Nacra 17 for the event. Without them we would not have been able to make this trip. If we didn’t sail in Palma, we’d be six months behind during Nacra 17 Worlds in July. Instead, we’re exactly where we want to be, mixing it up in the front of the fleet.