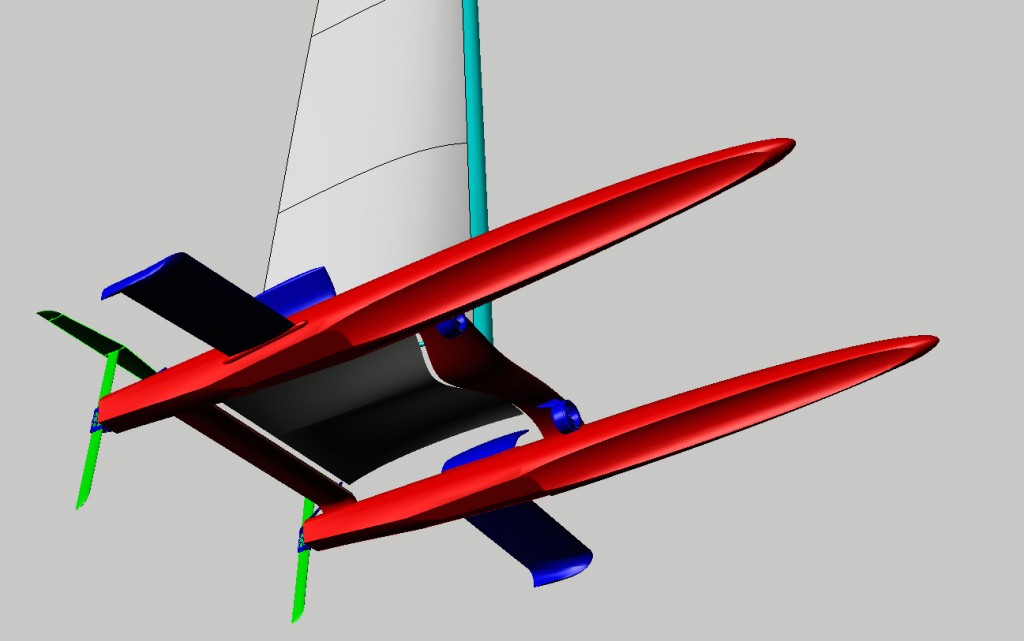 The next big thing? From Dario Valenza, of Carbonic Boats.

Now that foiling is commonplace, the next great leap forward is eliminating water drag all together.

Bending curved foils in a whole new direction, they now support the vessel aerodynamically taking advantage of ground effect. This is a thoroughly proven concept and it was only a matter of time until someone applied it to sailboats. Preliminary research, wind tunnel testing and CFD simulations were done in greatest secrecy to avoid our competitors catching on. But now that we have started building we can safely announce that Skimming Hover Impactless Technology  is about to be launched.

Once flying in ground effect, theoretical speeds are in the hundreds of knots. As an added bonus the system will work over any surface. Provided you do not let the apparent wind fall away, you could conceivably sail up onto the beach and keep going until you get home. Then just ease sheets, land and, with some practice, you will have stored the boat until your next outing.

The technical difficulties that needed to be overcome were huge, but with a bit of ingenuity (and the right cocktail of mind altering substances) it could all be resolved. The biggest challenge was generating enough airflow over (and under) the foils to unstick the hulls from the water. We tested several possible options but most (such as RATO units) proved impractical. The final solution was simple: we developed a proprietary surface coating with dissolved conductive nanotube elements that ionise the air in contact with the foil. This creates a pocket of plasma that boils away the surrounding water and helps to provide the initial lift boost required. In addition we have ducted fans (operated by a winch grinder style crank handle) to direct air unto the lifting surfaces. Once the concept is established in top level racing, this element will place a premium on physical fitness and provide spectacular racing.

We can confidently say that Skimming Hover Impactless Technology (S.H.I.T.) will have a great impact on the fans. Check out our website and follow us to stay informed on developments of this and other more realistic but equally interesting projects.