Singlehanded sailor Ronnie Simpson did something bizarre – he went racing with other people!

The 2013 sailing season has started with a bang! First was an early March delivery down the coast on the sexy R/P 45 “Criminal Mischief, followed by the Islands Race on the Santa Cruz 70 “Holua”. Sailing with some of the top sailors on the west coast including Brian Caldwell, Bill Erkelens and navigator extraordinaire Skip McCormack, we took second in class and second overall, losing out on the win by just 9 seconds after more than 11 hours of racing!!! The mental image of a big fleet of sleds barreling down the California coast at 20 knots with their massive poled out a-kites on a windy night is now permanently ingrained in my memory. Good stuff. 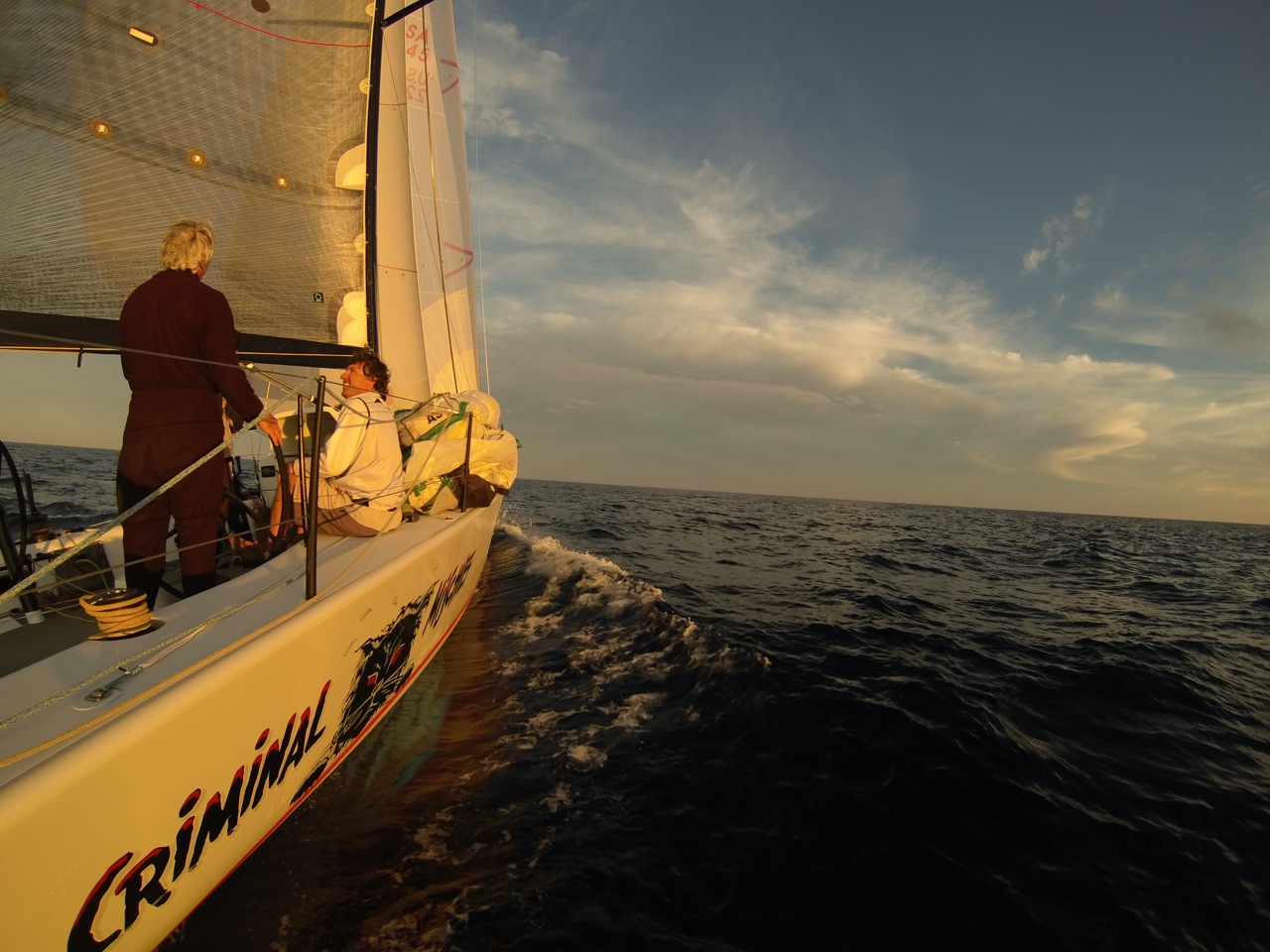 Just two days ago was the Newport to Cabo race on “Criminal Mischief”. The Criminal has been one of the Bay Area’s more successful offshore programs over the past 5 years and after taking the year off in 2012, owner Chip Megeath and boat captain Andy McCormick have come back with a renewed energy in 2013. Putting together a solid mix of pro sailors and top amateurs, we put the boat through her paces in the Bay and then added 2 days of full-crew practice in Newport Beach before last Saturday’s race start. Unfortunately, our little boat with a big rig doesn’t really fit in one class, so we ended up sailing in the wrong class. Despite the fact that we’re only 45 feet long, we were placed in the “Sled” division, which consisted of the Criminal and eight 70 footers. With a forecast for light breeze throughout the race, we surely had our work cut out for us as it was looking like we would get waterlined from the start.

We were just a few seconds late to the start, which was a blessing in disguise. A lane opened for us to make a quick clearing tack to port to find clean air before tacking back to starboard and rolling into the masthead genoa. The boat loves the MHG. In the light breeze that we had off the start, we were able to sail above wind speed, oftentimes seeing 8 knots of boat speed in just 6 knots of breeze. We were holding our own with the big boats, even upwind in light air. Or so we thought… At day break, we found out the first rankings and we were last in class. Damn. After a couple of frustrating periods of slatting around in no breeze and seeing triple zero’s on the speedo, we rolled into the A 1.5 spinnaker and began moving again. For the majority of the race, we would continue peeling between the A1.5 and the A2, with a spinnaker staysail thrown in whenever the breeze allowed. At night, when the breeze died off a bit, we managed to leg out on the bigger, heavier boats and continually pick off a boat or three each night. During the days, when the breeze freshened, the big boats would roll us, only before the next night when the whole process would repeat itself.

The race may have been difficult and frustrating at times, but our crew work and chemistry is awesome!. Chip and Andy have put together a great group this year. One of my best friends, and one of the top young pro bowmen in the game, James Clappier is running the foredeck, backed up by Greg “Radar” Felton. In the back of the bus, we’ve got Brendan Busch navigating, big man Noah on the pumps, myself and Andy in the cockpit and the uber-experienced Robin Jeffers and Ian Klitza as helmsman and watch captains. And the sailing wasn’t bad either! Despite not having our conditions (breeze-on and planing), the sailing was simply incredible! With light breeze we stayed warm, dry and comfy. Not the best for racing, but ideal for those clear full-moon nights of shooting the shit with your buddies while racing a sexy ultra high performance yacht down the Baja coast. Epic.

At the finish, the predicted 6 knots of breeze ended up being 20, and we approached the finish line lit up with the A3. Brendan had us bang the corner and we came in hot and fast. We’re still learning our polars and cross-over points and slightly missed a gear when approaching the line, which resulted in an extra sail change and being low and slow for the last couple of miles. Not a killer, but we lost a few minutes. The Criminal Mischief crossed the finish at 7 AM Thursday morning. Arriving at the dock, we happily accepted a cooler of Corona’s from the NHYC Cabo Race committee, put the boat away and then hit the Cantina hard for an all you can eat (and drink) breakfast which resulted in several crew members passed out unconscious for a well earned and tequila-infused nap.

In the end, we corrected out to 5th in class and 6th overall, which we’re all fully stoked on. 4 of the 70’s beat us in class, and other than that, we only got beat by the Rogers 46 on corrected time. Despite not having our conditions, we sailed the boat well and achieved a result that we’re all proud of, so it was a great experience and I can’t wait for Transpac. After a couple of days of relaxation, al pastor street tacos and delivery prep in Cabo San Lucas, the surfboards and delivery sails are loaded for the long bash back up the Baja coast. We’re headed all the way back to San Francisco for a busy schedule of local offshore racing in SF and then a run at Transpac. The boat’s won it’s class in multiple Hawaii races and we’re in it to win it this year.

In addition to my full season of offshore racing on some great west coast boats, I am moving forward aggressively with my campaign for the 2016 Vendée Globe. RonnieSimpsonRacing.com is up and running, i’ve got a series of speaking engagements lined up at local Bay Area yacht clubs this spring and I’m rolling into a national PR campaign as we speak. Up first is a feature article by Kimball LIvingston in the current April issue of “SAIL” magazine. Kimball’s killer article highlights my story, my Vendée aspirations and the work i’m doing in teaching wounded veterans to sail. Up next is a New York Times Op-Ed video piece produced by two-time Emmy award winning producer Jen Brooks. The video has some killer solo Class 40 footage on the Bay. Look for it in the next 1-2 weeks.

After that we’re doing some promotional video work for a major multinational corporation’s marketing use. This campaign is taking off and the feeding frenzy is beginning. I am aggressively pursuing a sponsor to campaign an Open 60. Look at the press we’re generating, check out the campaign website and proposal and drop me a line. It’s more affordable than you think. Let’s get another American in the Vendée Globe. – Ronnie out. Title thanks to former S/C 52 owner Bob Seger.

if it ain’t broke