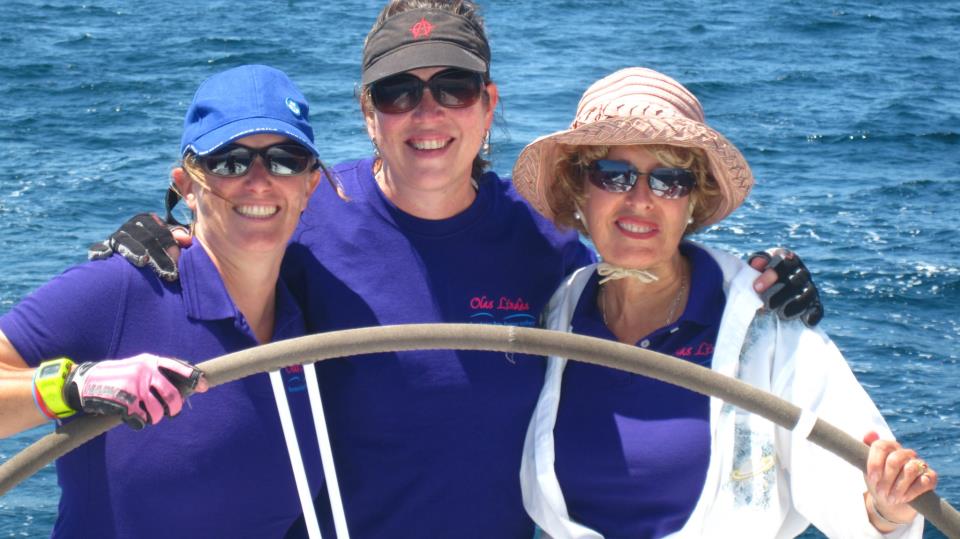 The 2013 Bandares Bay Regatta, also known as Regata Internacional Bahia de Banderas, in Puerto Vallerta is billed as a fun regatta. This year the racing started for the 60+ boats at the gentlemanly hour of 1pm. We began with a boat parade, and then the schedule was one long race on Thursday, Friday and Saturday, followed by a party at the YC and a different band every night. It is a fun regatta!

I hopped on board Olas Lindas, a Varianta 44, built by Hanse Group, owned and skippered by Linda Sweet out of Toronto. The boat is a stunning monohull with simple lines and gigantic kites. When I sat down with the crew, I found out quickly that half were from San Francisco, including Eugenie Russell well known now for her life saving efforts when the J/120 she was racing down the coast hit a whale and sank almost immediately. There were some gorgeous boats out last weekend, a few fast ones, and lot of cruisers.

The Sig 45, Vamanos! with Cam Lewis, Peter Stoneberg and Tom Siebel on board, soundly won her class and actually downgraded her handicap to her Big Boat Series number to make the racing more fair after she won the first day by more than 20 minutes. She was followed by Huma Huma a 70′ catamaran with another SF local, Mary Coleman, and her crew of Bay Area friends. In our fleet we sailed well together, against good competition and won our class. We were famous (at least we thought we were) for our all female afterguard.

Thursday’s racing included a reaching leg and Friday’s course extended the reaching leg well south into the bay adjacent to the old town of Puerto Vallerta, making for awesome blast reaching and a scenic race.

But it wasn’t all roses unfortunately.

The forecast for Friday was light, but the wind kicked in and by 1pm we were seeing 15-17 knots of breeze. We were in 2nd going into the day, Blue was in First. We needed to beat them. As we came down the line in the final seconds of the pre-start, Camelot came in to windward of us and we pushed them up to keep our starting area clear. They came up and closed the door (we thought) on Blue who was reaching in on starboard to get a boat-end start. We had a clear air start and quietly watched the collision between Camelot and Blue. Blue seemingly had no place to go aside from below Camelot, but they stayed the course and went in between Camelot and the RC boat. It appeared from where I stood that Camelot had all the rights to take them up and Blue shouldn’t have been there. Unfortunately there was contact, Camelot’s starboard mid-ships, with Blue’s port hip.

Blue rolled up her sails and headed home so we knew something had happened, presumably damage. What we didn’t know then is that their crewman Mike Danielson, a well loved local sailor and rigger had slipped between the two boats during the collision. Both of his legs were broken, a total of 5 breaks and his ankle was shattered, according to Eugenie, who talked to him in the hospital.

At the party, the band played on, but the talk and questions about the protest, and the news of Mike’s injuries persisted. A sad incident, but it didn’t slow down the party too much. The venue must be one of the best on the West Coast, and the short flight from California explains why so many SF-ers visit. Mike, we send our best wishes to you and your family during your recovery.

where the rubber meets…the sea?