nowhere else on earth? 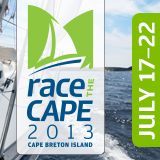 If this description sounds like nowhere else on earth, that’s because there really is nowhere else on earth like Cape Breton Island. It’s been called a top 10 boating destination in the world, the #1 most beautiful island in North America (Travel & Leisure) and its inland sea is recognized as a UNESCO Biosphere Reserve.

Now, there’s a world-class, multi-leg point-to-point sailing race through this inland sea and out into the Atlantic Ocean – Race the Cape. Timed to follow the Marblehead to Halifax Ocean Race, Race the Cape will provide an exciting new test for skippers and crews.

Not to mention that the amazing scenery will be a constant distraction.

The National Geographic Traveler editors have just released their picks for the Best Trips in the World in 2013, naming Cape Breton Island among the top 20 must see places!

When the day’s race is completed, Race the Cape turns into a floating festival with Cape Breton’s renowned vibrant Celtic music, mouthwatering seafood and legendary hospitality being shared in every harbour along the route. It’s a new adventure in every port!

Join us July 17-22, 2013!
Race the Cape will unfold over six days this July. Four days of challenging point to point racing through the amazing Bras d’Or and along Cape Breton’s rugged Atlantic coast. Five nights of legendary Cape Breton food, hospitality and entertainment!

Get connected with Race the Cape:

Check out our Website. Join the Thread. Email for info: [email protected]. Join us in July for what is sure to be one of the best Sailing Races in one of the best places in the World!

Round Up, Bloody Tough