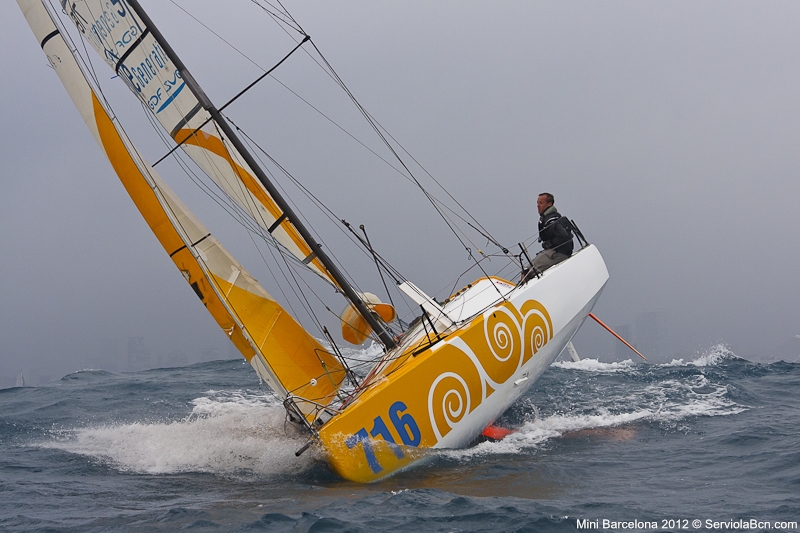 It’s a Mini Transat year, and we’re looking forward to a pile of great stories from the most anarchic race – and class – of all.  We’re stoked that America once again has a contender in what will be another huge fleet; Midwest native and shorthanded specialist Jeff MacFarlane already took the overall win in the first race of the year; the 190 NM Solo Roma Solo Race.  We caught up with Jeff for a little SA Innerview intro, and we encourage you to check out his page to stay on top of his upcoming campaign.

JM: Sailing on a mini is amazing and like no other sailing experience I’ve ever had. After doing so much doublehanded sailing back in the US, I thought I knew what it would be like, but it has far exceeded my expectations. Being alone on any boat gives me with a feeling of tremendous freedom and solitary reliance, it is hard to describe. This feeling of freedom and independence is intensified on the mini because no outside communication, laptops, or graphic GPS are allowed. Organizers even make everyone turn in their cellphones before a start! Because a prototype mini is a very technical and sensitive boat, I’m always working. I try constantly to tweak and adjust all of the different options to try to squeeze out every ounce of performance. The boat reacts to everything in an instant, and there are as many controls as you’d ever want.

SA:  The whole mini scene seems like something out of a reality show.  What’s the community like?

JM: The race scene is awesome! The skippers are extremely friendly and there is a great sense of camaraderie amongst us. Starting even before my first race I felt welcomed into the class. Between races, skippers arrange deliveries in convoy along with training sessions, and during events, you can forge all kinds of great friendships with numerous group dinners and hangouts.  All of the skippers have been more than willing to lend tools, translate racing documents, refer good subcontractors…but once the gun fires, it’s all business.  The mix of camaraderie, competition, and strong friendships built around a serious passion for the most unique of classes –  I just love it.

SA: What do you realistically hope to accomplish?

JM: Well, ideally, I’d like to win the race! Of course, that is my ultimate goal. And, I think that I am in an excellent position to succeed. already I’ve performed well in my first two races, taking home a 2nd and 3rd place finish [along with yesterday’s first -ed]. I ended 2012 with a world ranking of 22, competing against guys who had been working on earning points all year.

On the way to trying to win , I’d really like to continue improving my ranking by sailing well in the races leading up to the MT. I think I am in a perfect position to help put mini racing, as well as more single handed ocean racing, on the map for Americans. At this point, there are so few Americans inovlved, but I’d like to change that by sharing my experiences.  It’s economical, incredibly challenging, and you learn so much about yourself as both a sailor and a person when you go for this kind of racing.   I’m convinced that sailors from all disciplines will love this style of racing if they only give it a try!  If I can encourage other Americans to come take a shot at the Minis, I’ll consider that a big success.

SA: You’ll be racing against some spectacular sailors who’ve been doing this since they’re teenagers. What will it take for you to win?

JF:  Without complete focus and determination, it would be impossible to win the MT,  but it takes a lot more than just that. There is tremendous skill needed for success, particularly in the areas of boat speed and simply self management. On top of that, knowledge about weather is absolutely essential. Without outside contact, understanding and predicting weather patterns helps with navigation and safety.  Keep in mind you are the only person on the boat, you have to be able to fix anything. A lot can happen over the course of the race, so you really need to be ready for anything and everything. Finally, it takes a fast boat.

SA: Why do you think you have a chance to win?

JM: I have the determination needed. I’ve always dreamed of winning the MT, it has literally been my goal since I started racing as a young child. But before competing against the sailors from Europe, I didn’t really know what I was up against. I have had wonderful successes in the U. S. and Australia, but until a few months ago, I didn’t know exactly what my competition would be like on the mini circuit. This type of sailing is in their blood and they have a tremendous amount of experience doing it. But I do realize how much work I need to do before the race. My schedule from now until the start of the race is simply to race and train. I don t think there will be another sailor on the starting  line who will prepare as much as me. Finally, and crucially, I have a quick boat. I am racing the Marc Lombard designed proto #716, a boat with a fantastic history.  HP Schipman works for Lombard, and he not only had the boat designed by his own firm, but he built the boat himself.

SA: The few Americans who’ve done it seem to fade away after completing a Mini Transat.  Where do you go?

JM: As I said earlier, winning this race has been a long time goal, but competing on the circuit also brings me closer to achieving some of my other deep rooted goals as well. Ultimately, I would like to compete in the Vendee Globe, and I think competing in the Mini is really the first step in making that dream into a reality.