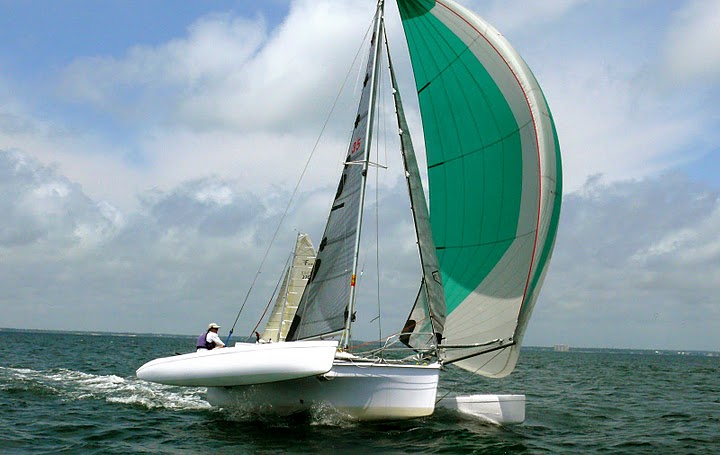 The 2013 US Trimaran Nationals will be held April 25 – 28. This event is open to production and custom trimarans and will be co-hosted by the Pensacola Beach Yacht Club and Pensacola Yacht Club. The event typically comprises all Farrier and Corsair designs as well as any trimaran with a PHRF rating.

This regatta, first held in 1995 is the original Trimaran Rendezvous in the US and features many perpetual trophies to be sailed for in addition to the traditional Class awards. The Ian Farrier Trophy is for the overall fleet winner and was captured in 2012 at Fort Walton Yacht Club by the team of Bob Hodges and Donnie and Andrew Brennan on their Corsair Sprint 750. The “Amateur Crew Award,” presented by Don Wigston and his company Windcraft waits on the shelf as well as a Distance Traveled Award and the Farrier 27 Sailboat Hall of Fame award.
The fleet will include defending champion Hodges and previous winners Randy Smyth of Fort Walton Beach, FL, Don Wigston from Mary Esther, FL, and Mike Parsons from Madisonville, LA.

The event will commence on Friday the 26th with a fifteen mile race from Pensacola Beach to Juana’s Pagoda in Navarre for lunch, followed by a return race back to Pensacola Beach. On Saturday morning the fleet will sail into Pensacola Bay with a “steeplechase” race to Fort Pickens located at the pass at the mouth of the bay. Following lunch on the beach, buoy racing will continue on the bay in the afternoon. On Sunday the schedule will conclude with more buoy racing followed by awards. The NOR (under Events) and electronic entry forms (under Racing) are here.

Title inspiration thanks to The Crystal Method.