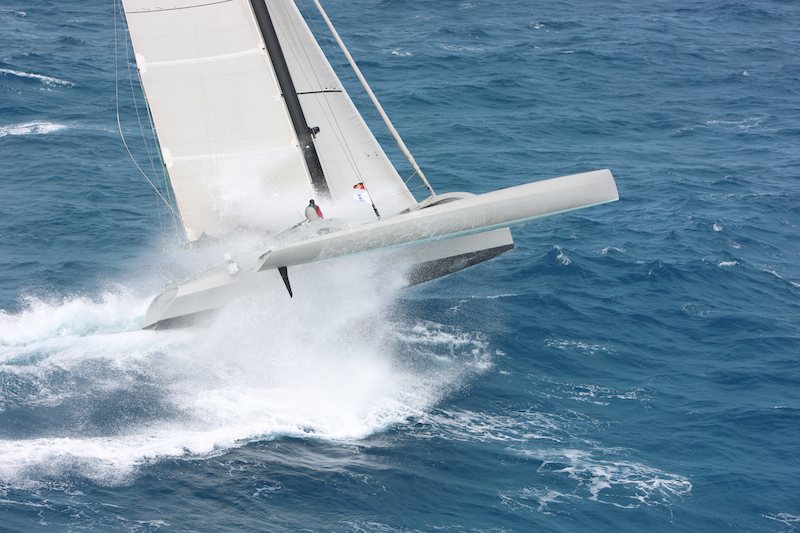 Peter Aschenbrenner’s ballistic Nigel Irens designed trimaran Paradox scorched around the RORC 600 track in just over 40 hours, barely missing the overall record while taking line honours and the multihull class win.  Paradox’s design is derived from the ORMA 60 class, but with two tons of accommodation and a significantly smaller rig.  We profiled the boat with designer Irens when it first landed in the Caribbean, but here’s our first digital sit-down with scary-smart owner Peter Aschenbrenner.

Paradox: An argument that produces an inconsistency, typically within logic or common sense, which is valuable in promoting critical thinking and sometimes results in the re-examination of mathematics or logic.

SA: Where did you get your sailing start? 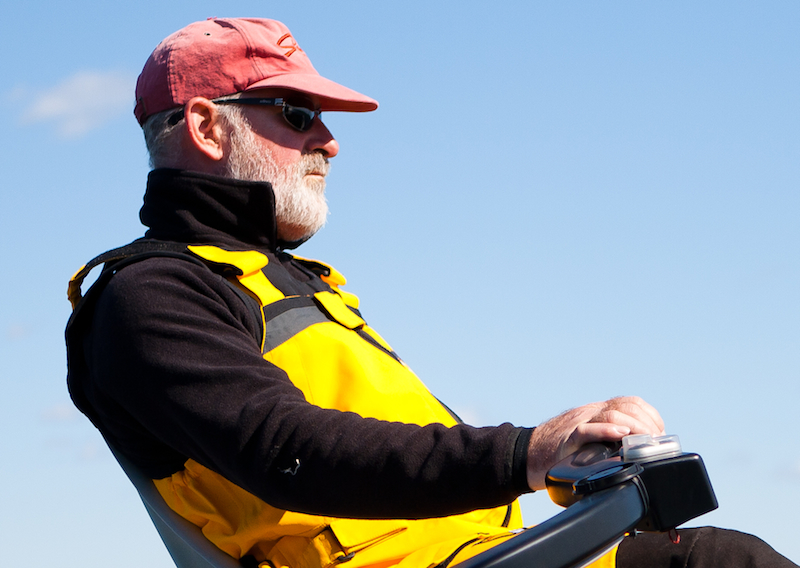 PA: I first started sailing when I was about 8, at summer camp in New Hampshire on a Town Class dinghy. I remember taking a two or three day excursion around the lake and distinctly remember how much I loved the sense of freedom, of being in absolute control of your destiny. That really appealed to me then and it still does.

SA: What kind of boats made you the sailor you are?

PA: My love for sailing was a catalyst for my Dad, who bought a 22ft Dutch built sloop.  We lived near Boston and kept the boat in Marblehead, sailing every summer up to Maine or down to Newport.  As often happens, my Dad owned a succession of larger and larger keelboats on which I cruised and raced until I went off to college.   After college I moved to Europe and started a family and didn’t do much sailing until getting into fast singlehanded dinghies while living in Delaware.  I sailed in the Chesapeake Bay and in Nantucket on a little MX Ray and then graduated to a Musto Skiff after moving back to California.  I sailed for fun – essentially just for the pleasure of sailing fast on a high-performance boat.   I believe that the instincts I developed sailing skiffs are quite useful on a boat like Paradox.  Both are “apparent wind machines” that don’t like being overpowered and that reward proactive planning.

SA: How about multihulls?  Have you always been into them, or is it a recent thing?

PA: I have been very interested in multihulls since the mid-70s, and remember watching the evolution of the species with great interest.  The essential challenge of sailing is the efficient translation of wind energy into forward motion.  To me the modern multihull, and particularly the trimaran, represented a quantum leap forward with respect to this basic equation.  When I attended a few ORMA races around 2000 -2001 I was absolutely blown away by the sophistication and performance of the boats.  Looking back, it seemed that I had made up my mind years earlier that I wanted to own such a boat someday.    In fact Paradox is my third attempt to build a high performance cruising trimaran, the first project was back in the early ‘80s with a John Shuttleworth design, and then later I took a run at a Nigel Irens 50 footer that did not pan out either.  The third time was really a charm for me – Paradox embodies everything I had dreamed about for so many years.

SA: Paradox is a cruising boat, right?  So what’s up with all the racing?

BA: I have to say that racing is not the primary driver for me. I love to sail fast but it is the process itself that appeals to me; the applied physics of the problem.  I like to race occasionally as it provides a good excuse to “let out the beast” and push the boat to its limits, but I am also perfectly happy sailing by myself or with friends.  Paradox is such a blast to sail – she is super responsive, particularly at 20 knots of boatspeed or above.   Just like a dinghy, you can put the boat exactly where you want to.  Reaching downwind at speed in big waves is like skiing the moguls.

SA: You seem to dig the long trips too.

PA: People ask me what is it like sailing Paradox across an ocean. For me it is about independence rather than isolation.  Some people are frightened by that but I enjoy it. I love seeing 360º of unbroken horizon – it goes back to a sense of total freedom, you become your own little sovereign state.  Sailing across the Atlantic, we go for days without seeing any other boats or aircraft.  It is a primal interaction with the Earth that you won’t get any other way.  Where else can you be where the scenery hasn’t changed for a couple of million years?  It reminds me of the film Waterworld.

SA:  So what’s next for Paradox?  Will we see you in a Transpac, or Fastnet, or do you just disappear off to palm-filled islands with dancing girls?

PA:   No plans to do the Transpac or Fastnet at this point.  Our next race will be the Voiles de St. Barth, after which I’d like to cruise a bit in the San Blas islands and then bring Paradox through the Panama canal and up to the San Francisco Bay for the summer.  SF is home base for me, so I’ll have the chance to day sail with friends and colleagues and just enjoy blasting around the Bay and watching the AC circus. We’ll probably do a couple of the local races including the Rolex Big Boat Series. After that – who knows.  The Pacific beckons…

SA:  now that you’ve put thousands and thousands of miles on her, Is there anything you’d change about the boat if you had to do it over again?

PA:   Not much.  I am pretty happy with the interior accommodations and equipment.  We made some minor tweaks to enhance “cruisability” over the past three years and I am really happy with the boat functionally.  As you may remember from your interview with Nigel Irens a couple of years ago, Paradox started (conceptually) as a smaller boat and gradually grew during the design phase from 50 to 58 to 60 feet, and then we added three feet of stern scoop after our first season.  If I were to start over again I would perhaps see if we could push overall length even more – perhaps to around 70 feet with the main hull bow pushed forward vs. the floats like Sodebo or Idec.  This would have given us a little more foretriangle area since the gennaker flies from the tip of the bow.  Nigel has a maxim on multihull design that I would paraphrase as “Design the longest boat you can possibly accept and then add a few feet”.

SA: Of course, the siren song tempting every sailor is “higher speed”.  I confess that over the past three years I have at times been sorely tempted by the prospects of a taller mast, big bowsprit, retractable foils in the floats, etc.  If I were to do all this and take some weight out of the boat I would end up with….an ORMA 60!  I think that one of the most important and difficult aspects of any creative project is to know when to stop.  In the case of Paradox, I feel that through the collective experience and wisdom of her designers, project manager (François Boucher) and builder (Sam Marsaudon), we were lucky enough to create a very harmoniously balanced sailboat.  This sense of balance and proportion is probably the key factor that helped me resist the temptation to pursue some of these big performance enhancement projects.  I can honestly say that I have never been scared sailing on Paradox.  I am not sure that I would be able to say that today had we fitted a larger rig and foils.

Pics thanks to RORC/Photoaction.com (aerial) and Louay Habib (portrait)
adminMarch 7, 2013
Leave a reply

Take This Cup and Shove It!