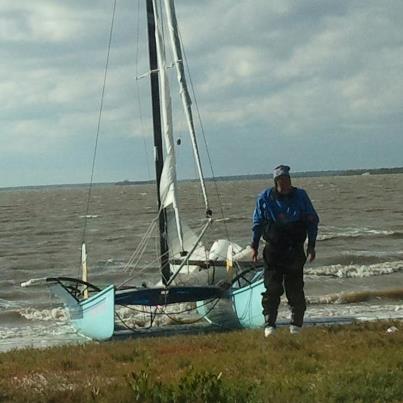 After many months of preparation the Everglades Challenge start had arrived. Mary Lynne and I arrived late to the Fort DeSoto beach on Friday making the assembly of the Hobie 18 a fast but stressful time for me. Only after raising the mast did I notice a twisted shroud shackle located at the hounds. No problem I’ll capsize the boat Saturday morning to fix…. smart? Hardly, for on race morning in doing so I broke the port tiller casting to the cross arm! Dumb Dumb Dump! The fix on the beach worked until several jibes out in the gulf on leg one. It cost me a little time in repairing until a better fix I devised at CP1.

The start at 7am came and the fleet was greeted by clear skies and no wind. Randy was first off and paddled Sizzor away. I followed and was quickly hoping a breeze would arrive soon for the Hobie did not paddle well. Thankfully it did and the race had begun for me and my fellow competitors. It did not take long for Randy and I to lead the fleet in the gulf. With gray overcast skies and a unstable breeze we all headed south to CP1. As the day progressed the wind built and I threw in a reef. In hindsight I sailed too conservatively, with the reduced sail and problems with the poorly repaired tiller casting I was caught by the Hobie 16 sailed by Heathen and Lugar just before entering Stump Pass. Still a good day being 3rd in fleet with about 97 teams behind me.

CP1
Cape Haze Marina a good quality stop even if it was quite a sterile setting compared to the old location. Being greeted by ML and solid land is always a great stop. After a much better design for repairing the tiller I was off after a brief stop. Sailing south down the Inter-coastal was easy with the breakers at Gasparilla Pass just ahead. Going out Gasparilla looked scarier than it really was and quickly I was off sailing with full main and jib on a beam reach. Hearing the news of the Coast Guard retrieval of Puma on the Prindle 19 catamaran sort of spooked me and I decided to sail conservatively into the rapidly approaching night. As darkness fell and into the night several times I thought the weather was going to turn nasty. In hindsight, I was greeted by dark ominous clouds and each time I dropped my main and sailed onward.

The cumulative effect was a big drop in performance in sailing speed and loss of what turned out to be irreplaceable energy. This is what truly cost me the most, for as the evening progressed I slipped into a mental coma and the early signs of hypothermia! In my unstable mental condition I began to make poor decisions. Choices made in navigation that cost me many extra miles sailed, time and potentially my life. If something happened to the boat that required anything major on my part I would not have been able to deal with the situation. If I had capsized even with my EPRB I do not know I would have survived awaiting rescue. I do not say these things lightly for I am a highly experienced sailor and know that at that time even for myself I was incapable to making or performing sound decisions and manual tasks. Out of fear or paranoidia by 1AM on Sunday morning I dropped all sails but the last 3 feet of the mainsail and devised a bungy system to assist in sailing the boat while I curled up into my survival blanket. The survival blanket saved my life for the next 4-5 hours.

Unfortunately I kept the boat on starboard jibe and even sailed further west away for the coast! In the morning, I eventually found myself 25 miles offshore when the sun began to rise. After all those months preparing the Hobie I neglected to prepare myself and the conditions I would face in the race, stupid so stupid! With the sun and its warmth I began to head back in the direction of the shore and i Chokoloskee and CP2. Unfortunately it took almost all day to make up the time lost and many unnecessary miles sailed due to the blunders made the night before. To see Indian Key over the horizon, the entrance to Chokoloskee was a beautiful sight, first for I knew I made it and secondly it is a beautiful location and beach setting. Sometime soon I’ll have to return with my powerboat with time to enjoy the island.

CP2
After the previous 24 hours sailing the sight of ML and Chokoloskee was truly life saving. I was totally spent, tired, shaken and even in the warmth of the afternoon sun slightly disoriented. Between the two Pat’s I meet on the beach and ML I felt saved. If a room was not available I would have had to drop out of the race, yes my condition was that bad. A hot shower, dinner and sleep is what I needed and received. Tomorrow shove off at high tide 8AM.

Onward to CP3 and Flamingo
After a few repairs and adjustments the Hobie was good to go. For sure sleep is the best cure for all things. The winds were forecast out of the north at 10-15 kts and sunny making the leg an enjoyable one to experience. I sailed out of the Everglades in the company with another competitor. At Turtle Key the exist point of the Everglades I was joined by a pod of Dolphins, a good prospect for the day. In no time the breeze had built to 15+ kts and with the screechier out I sailed at over 14 kts in hull speed, what fun! With the improved conditions I played w/ the GOPRO camera a lot this day, (video to be posted on Facebook soon). Even though the winds dropped off as the day progressed it was a great day. After rounding Cape Sable I entered and checked into Flamingo CP# at 5:30PM on Monday. Ridgerunner the CP check point manager greeted me for my short stop and welcomed me as I welcomed him for his participation and support in the EC.

On to the finish in Key Largo (the final stage) 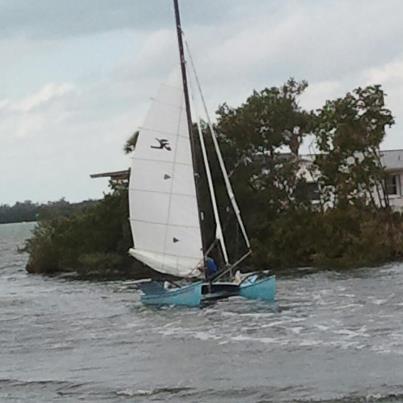 With the sun about to set I knew the window of opportunity for any wind and of course the correct wind direction was very small. Crossing upper Florida Bay is very difficult and shallow draft powerboats much less a sail catamaran. The bay is large but except for a few very shallow and narrow channels it is almost impossible to cross without the timing of the right tides and wind direction. With the sun about to set the winds began to change from the (northeast and uncrossable to the south and very cross-able), so I was off. Enter the long first channel, Tin Can I progressed towards the finish without a hitch. By now the breeze is light under 7 kts and it is dark. The graphic GPS is very accurate but over the years the channels moves with hurricanes. Local fisherman mark these channels with pipes or PVC and most of the time they’re not marked very well. I’ve learned with my previous 2 crossing the second most valuable too crossing Florida behind the GPS is a very powerful spotlight. After Tin Can is Bouy Key, by now 9PM the wind is almost none existence and boy did it die. Now that I’m in the tight conditions of the Bay my biggest concern is when the wind does reappear is from which direction it will come from.

Anything out the the NE is death and I’d have to retrace my route and take the much longer southern route. Nothing to do now but drop my centerboards into the bay bottom, remember I’m in only about 12 -18 inches of water. So once again I wrap myself into a survival blanket and catch a nap. Just past midnight now Tuesday I find the slightest wind appear and yes it is out of the North not perfect but definitely doable. So once again I’m off, well just barely for the wind is there but remains very light for the rest of the night. Next is the Dump Keys which I would like to know the history of for it is two small keys with the channel cut right through the middle. By now the wind is up to 3-4 kts and I passed through the cut without an issue. At End Key I now head south to Buttonwood and then to Caloosa Cut and Jimmy Channel.

By now I can begin to see a little light in sky as a new begins I begin to reflect on the race experiences. The lows and highs, lessons learned and mistakes newer to make again, at least intentionally. Its 8:30AM Tuesday morning as I pull up to the beach at the finish and I am greeted my ML, fellow competitors and yes solid land! My Everglades Challenge experience is concluded and today after another good nights sleep I will still need time to process it all. Thank you to ML, my friend Birch, family and friends and member of the Key West Community Sailing Center for all your support. I could not have accomplished this alone, thank you. – justanothersailor / Guy deBoer.