The following is rewritten from an article published about 40 years ago. It came to me in a package of old letters and clippings from the man who started me sailing big boats in the late 1960s. Sean O’Connell was well known in the New York Metro sailing circles for over 8 decades. He had been a founding member of the Storm Trysail Club and held membership at many sailing clubs including Off Soundings, Stamford Yacht Club and New York Yacht Club. I apologize for not knowing the author of the original article but the style looks like it may have come from One Design and Offshore Yachtsman circa 1970.

UPDATE:  This article was  written by UK Sailmaker’s Owen C. Torrey, Jr. and it was titled “The Year of the Black Deck” that ran in Yacht Racing magazine in the mid 70s. Owen was a long-time sailor on Long Island Sound who was a Star Boat sailor, an Olympic Bronze medalist (1948 the Swallow class), UK Sailmaker’s head sail designer and he wrote our early computer sail design programs. He was a member of American YC, NYYC and the Storm Trysail Club. He was the president of the YRA of Long Island Sound and head of the PHRF Committee for many years. He also had the best line about computers. If I ever complained about my computer crashing or bogging down, Owen would simply say, “Adam, it is a wonder they do anything at all.” Perfect! Adam Loory, UK Sailmakers International. 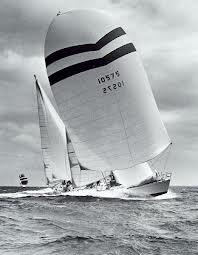 It all started when a secretary in the office of a Westchester, NY boat builder transposed the colors for the construction of a new One Ton boat for Bus Mosbacher. It was supposed to have black topsides and white decks but somehow that got reversed. On the day of delivery Bus was very upset with the black decks as everyone knows they can get very uncomfortable on a hot summer day and in full sun for a couple of hours make an oven out of the cabin. There wasn’t time to change the colors so Bus pushed off for the One Ton regatta in Newport, RI. The weather on the trip up to Newport was uncommonly hot with the cabin temperature reaching 120 degrees. On deck, not only was it hot underfoot, but no one could sit down!
Bus went on to win the series despite hot decks and cabin.

This regatta had attracted an unusual number of reporters from a variety of publications. After the final race, Bus and crew were tired and trying to give polite abbreviated interviews when an insistent young lady from the Christian Science Monitor (CSM) pressed him several times for the secret to his winning success. After having her many questions answered graciously by Bus, she pressed again for the winning secret. Wanting to end the interview and take a cool shower, he blurted out “the black decks”. Well, that made it into the CSM article and many sailing publications picked it up.

Soon black deck started appearing around the country. Just a few at first but a noticeable smattering. Speculation developed in sailing circles about the black decks. As they say today – there was buzz. Technical articles on the subject appeared in yachting magazines. One of the most widely read was by a technical writer for a popular monthly sailing magazine which explained at length how the warm air rising from the decks would inhibit the flow of wind around the underside of the mainsail from the windward side to the leeward side. This was labeled “Induced Collateral Endplate” which everyone “understands” would double the effective aspect ratio of the rig…………………………………….. Soon more black decks appeared.

The conversation at the yacht club bars, après race, centered around the value of the black decks and how it was now the foul weather races that were more comfortable and desired by those with black decks. It was concluded by most, the tradeoff of burning feet and bottoms to maximize the “Induced End Plate Effect”, was worth the discomfort.

The industry responded with remedies to mitigate the hot foot and cabin oven challenges. A new super light insulating material was developed as an overhead liner for the cabin. Sailors insulated their Topsiders and racing shorts so they could sit down again.

Black decks were taking off to the point where the International Technical Committee (ITC) of the International Offshore Rule (IOR) decided to commission a study. Pending the results of the study, it was decided to assess an arbitrary .75 % penalty on any boat with a black deck. Not to be out done, the Storm Trysail Club concluded the ITC’s penalty was probably wrong and assessed one of their own of .875%. As soon as these penalties were announced, owners who had been considering painting their decks concluded there must be something to this and more decks “got hot”

The matter was now being seriously considered by the naval architecture community. Owners designing new yachts wanted every speed advantage and were requesting new boats be designed with black decks. One of the most prolific design firms published their “White Paper on Black Decks” It ran on for several hundred words, was extremely well written and concluded that “black” was the darkest of colors and undoubtedly would provide the maximum Induced Collateral End Plate Effect.

The top of the game was now studying the issue and working the angles. Charisma’s decks were painted with a special paint containing pulverized titanium to cut down on weight. This very expensive paint was known as “Light Black”. Another famous sailor used dark blue and thus avoided the penalty. This put the ITC into a tizzy and a committee was formed to investigate using a light meter to measure the reflective properties of the surface, regardless of color. The committee assessed an arbitrary penalty against the dark blue decks of 10%, as a punitive measure. The yacht Equation wanted to capitalize on the speed advantage of black decks during daylight but not have the disadvantages of the decks at night. Accordingly, their naval architect designed a series of louvers, like a venetian blind, running athwart ships. The louvers were painted black on one side and white on the other. They were of course operated by a complex hydraulic system and the bilge pumps were easily able to keep up with the deck leaks.

By the next Bermuda Race virtually the entire fleet was equipped with black decks. Unfortunately it was a very slow, long and hot race. Even the boats with air –conditioning or special insulation, had conditions below decks which were unbearable. Many crews were so exhausted from the heat and extra days at sea, they withdrew from the race as they neared Bermuda. The winner of the race that year was none other than; you guessed it, Bus Mosbacher. It seems after considerable argument with his builder he had the paint mix up corrected. His decks for the race had been white and as fresh as a daisy he stepped onto the winner’s podium to accept the winning prize. When asked the secret to his win, Bus smiled and quietly said, “We just kept her moving all the time”.  – Dave White.
Dave White is program director for SAIL BLACK ROCK and coach for Sacred Heart and Fairfield Universities.

around the world race record

that time of the month