around the world race record 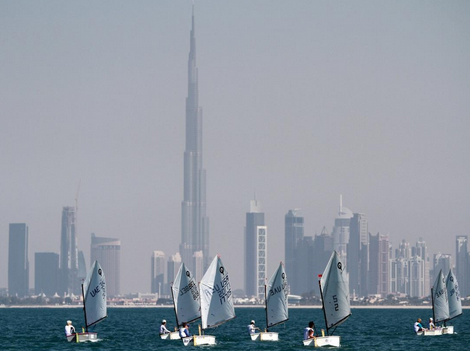 On Saturday, 16 February, twenty-two children aged as young as eight circumnavigated The World independently in Optimists in 5 hours and 45 minutes and Lasers in 4 hours. The expatriate children from the Dubai Offshore Sailing Club (DOSC) race squad are among the UAE’s most talented young sailors. Their voyage around The World archipelago was a fund-raiser for the club’s Youth Sailing Fund, which helps to pay for training, equipment and transport to races.

“I am so proud of how hard and how well our kids sailed in this event,” said DOSC head race coach Chris Pope. “It was a long, tough day for them, but they all had loads of fun, and they made it around in an excellent time.”

The World is a collection of 300 islands off the coast of Dubai in the shape of a map of the globe. Its breakwater has a circumference of more than 27 kilometres. It was the young sailors’ longest ever voyage and more than 10 times the distance they cover in regular races. They had been expected to take up to eight hours to complete the circuit. More.