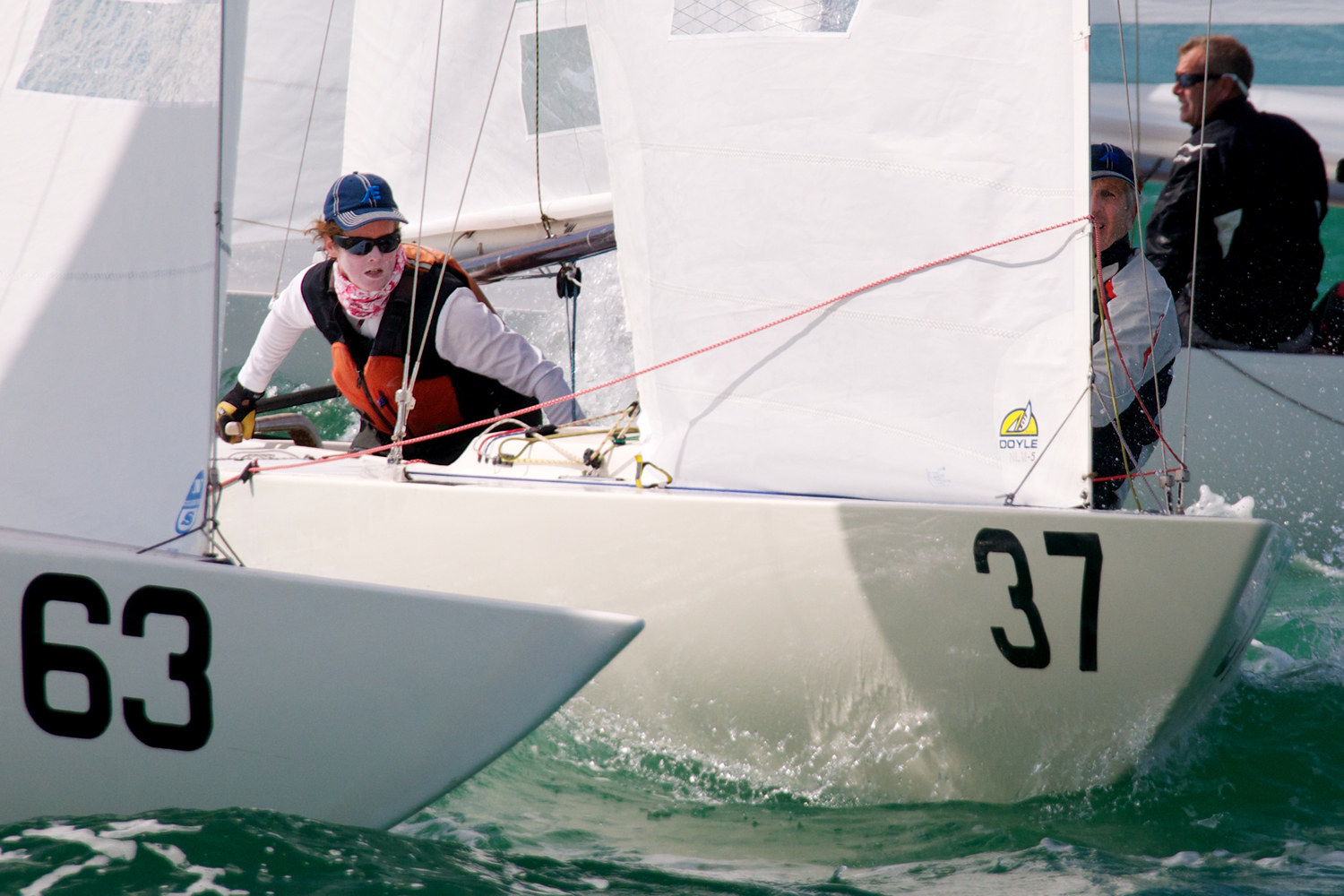 Shannon Bush seems to get better every year. This year she’s set a goal for the Italian Worlds, followed by the Etchells NAs in Newport. In pushing her program to winning levels, she’s added new team members, hired a coach, and taken extra days off work each month for practice prior to the Etchells Jaguar Series dates.

Brad Boston and Curt Oetking, both normally middle men on the Etchells, sorted out that lanky Curt would do the bow work and Brad would stay in the middle. “Curt barely has to stand up to set the pole,” Shannon said in a phone interview. She attributed her success over the course of the series (Flip Werheim sailed in her place in December) to great starts and staying in pressure.

Big fleet starts are key to having a chance at a top ten finish and it’s not easy to come out with a lane 5 seconds after the start when you’re starting among 50-60 boats. Larry Suter, coaching a group of Etchells racers, tells the team even if the lane is bad, try to stay in. If you tack out, like La Tormenta did in their first race last weekend, you can lose 15 boats in a second. If you can hold the lane, even as it gets narrow and stay with the group you want in the direction you want to go, you can hold your position, Bush said. She tries to stop what she calls the “swivel heads” when they are in a narrow lane and instead focus on keeping the position they planned.

Larry Suter, according to Bush, runs them through two minute starting drills, then into a race with 4 tacks and two jibes. The group is assigned to gain access to and start at varied points along the line, and over the course of the day rotate those starting points among the practice group. At around 2pm, Suter opens up their starting line to other teams warming up and often hosts 20-25 boats in his practice starts.

Racing this weekend, Bush said, was hard. “The flukiest, shiftiest conditions I have seen on Biscayne Bay in a long long time,” said Bush who finished 4th overall this weekend. In practice, Suter also had them working on tacking and roll-jibing which can give them as much as a two boat length advantage over a team that doesn’t roll-jibe the boat. Brad Boston, she said, was frequently adjusting the rake of the rig to keep up with the conditions. That’s where the other part of their practice, straight line sailing, usually two or more miles up Biscayne Bay, comes in. During the race, Brad and Curt are always looking at the sails, looking for the dark spots in the water and connecting the dots to stay in pressure. “We just had to stay constantly focused, stay in pressure, stay with the right pack, and stay in the starting lane.”

As for Worlds preparation, aside from their training, they have a challenging set of logistics to work on. With the Worlds in Italy and the North Americans just ten days later, they need to ship the boat from NJ to Italy in March, select the right sails from her sail card for the varied sets of local conditions, find a boat to charter in Newport, and figure out which sails go where. Best of luck to the La Tormenta team! Results posted here. Photo by Marco. Story by Paige Brooks.