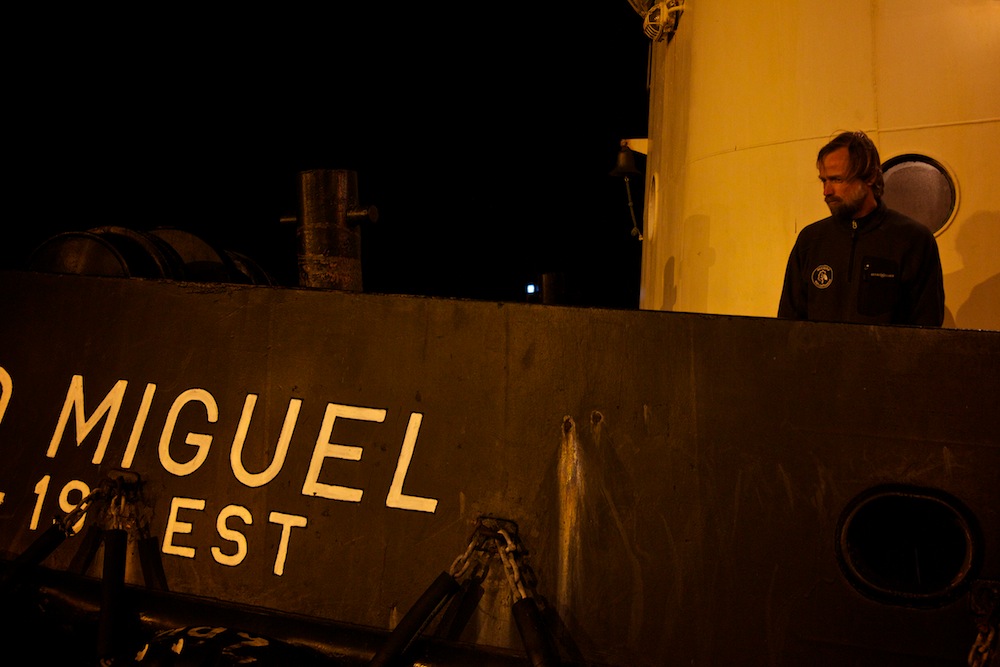 Acciona multi-media man Jesus Renedo is in Punta Delgada, Azores with the report from the salvage of the now-ironically named Acciona 100% ECOPOWERED…

I’m now just waiting for Bubi to get back with the tug, with Acciona upright and ready to be delivered home.

Of course last Sunday was a huge shock to us.  Ricardo, Pedro and I were actually having lunch while sorting out the details for a big welcome in Les Sables when the MRCC called to tell us that the EPIRB had been tripped.  The rest, you guys already know…

Ricardo and I flew to Terceira, where Bubi had been taken after his rescue.  We were very worried about how to cheer him up, and it ended up being the opposite!  He was in good spirits, very proud of his race, not too worried about finishing, and smiling.  “Everything is relative, like Einstein said,” Bubi told me.  “I am alive, so I am happy!”

We had a massive lunch , and while we were eating his phone didn’t stop, as he organized the rescue team.  Bubi would never leave his boat out there.  He has a wife and 7-month old baby at home, but there’s no way he’d leave a mission unfinished.

On wednesday night, less than 70 hours after being lifted from the ocean, Bubi was on the ocean again searching for his boat.  Four days later, he is just 70 miles from where I am.  It’s not possible to admire the man more than I do.  The attached photo was taken hours before Bubi left to find Acciona.
UPDATE From Jesus: We have just arrived, the mast is broken, and the boat .. looks terrible!!  but it’s all going to be OK.  We have some incredible footage from Bubi’s GoPro of cutting the rig away in some of the clearest water you’ve ever seen.  An underwater ghost ship!  We’ll get it to you soon.
Tags:AccionaGreen SailingJavier SansoJesus Renedo
adminFebruary 10, 2013
Leave a reply

don’t be a tosser This Earth Day, (today, btw) photographer Christophe Launay is suggesting something easy but imperative: “Don’t Be a Tosser.” (Readers in Commonwealth countries will find this an especially funny and easy-to-remember phrase. ) Basically, don’t be a wanker. Quit chucking your trash overboard.