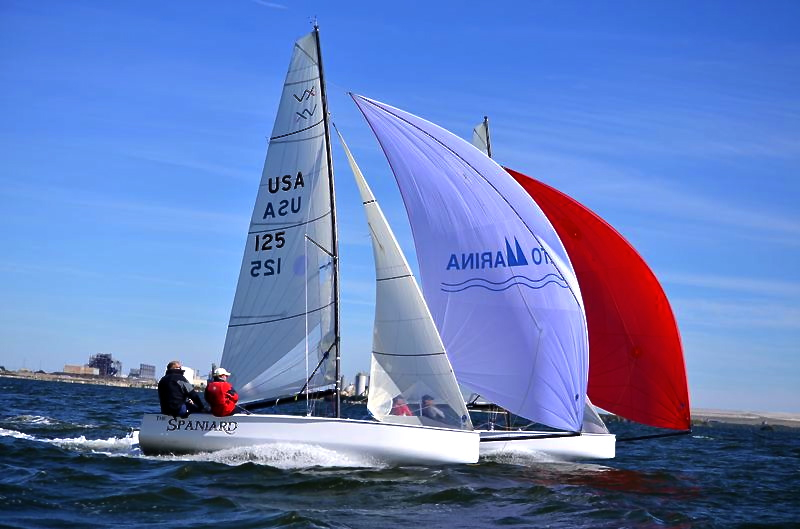 Some of the best race reports come from the outsiders, the newbies to a fleet.  Here’s one from Tim Pitts after the inaugural VX-One Midwinters last weekend in West Florida.  Chris Howell photos.

A good friend of mine, Jim Myers, has been known to set me up with women.  He’s a great guy with good taste…but I’m still single.  Read into that what you will; the point is that when Jim offered me a chance to sail his VX-One in their first-ever Midwinter Championship at Davis island Yacht Club, I treated it like another of Jim’s blind dates.

Like with some of the other girls, Jim had been telling me how great “she” was for months.  He sent me her glamour reels on Youtube and her glamour shots from various photographers, and I have to say – she looked damned good on the screen.  Then again, I’ve fallen for that trick before, so I didn’t get my hopes up.

I figured a little experienced help wouldn’t hurt, so I invited the 17-year old son of a colleague to come sail with me. Anthony Norris is an accomplished junior sailor from Michigan, and we arrived in Tampa on Wednesday to get some practice before the regatta.  Thanks to car troubles, the boat didn’t make it in until the wee hours, so we rigged on the morning of the first race.  Rigging was simple, and with no real idea on tension or tune, we just got the boat as ready as we could.

I am a part owner of a J-80 and have a plethora of crewing experience, but after rigging the boat and looking at the angrily snapping flag moving around in 18+ knots of breeze, I began to feel a bit underprepared.  When Anthony showed up weighing 120lbs (with me at 220), I realized we had another issue – we were the lightest crew on the course by a good clip.

My new goal for the day was to spend more time in the boat than out.  We got a 3 minute walk through on how to sail the boat and we were off.  As we left the harbor Anthony confessed he did not think he was going to be strong enough to launch and fly the kite (something I had been thinking already).  I told him “let’s try it”, figuring he could always hand it off downwind if he needed.  The kite came up with no problem, and as we skipped over the waves, I kept expecting to lose control – but that moment never happened!  The boat took off, and after a few gybes we were back at the line, ready to douse – with a little trepidation.   Again – no problem, and off we went to ready for the first race.

It was just like the interview process on a first date.  Get comfortable, play with various parts of her to see how she reacted, and ease into our relationship to see how it went.  I started off driving it like a laser upwind, and quickly realized that it wasn’t fast. Downwind it was easy to just sit back and enjoy the 14-15 knot ride – which I thought was fast.   That said, by the 2nd race we were doing almost 19 knots.  I will never forget Anthony looking back at me and shouting “this isn’t a sailboat – it’s a motorboat!” 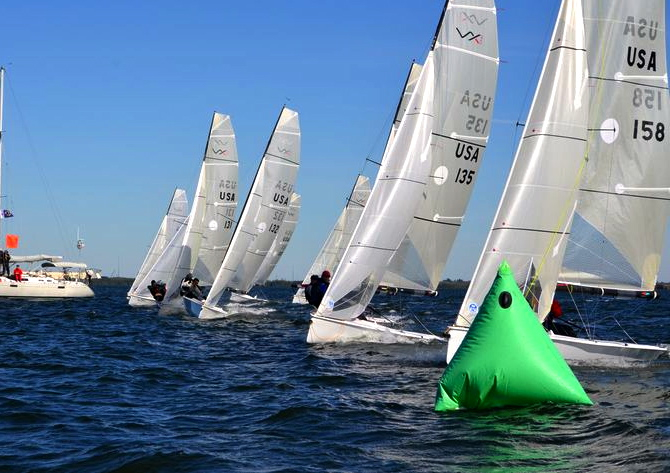 By the last race I started to feel we were ready to actually race, and it was time to think about tactics – a sign of real progress, and the day flew by quickly after that.  Next thing we knew we were back at the dock to chat it up with the fleet.  I couldn’t get over how much fun I had!  It took 20 minutes and all the boats were pulled out and back on the trailers.  Everyone in the class was helping each other.  As Donnie Brennan pointed out; “the quicker we get all the boats out the faster we get to drink Rum!”  Strangely, it was the first time I think I’ve ever raced a day in 20 knots and had the option to choose to drink – rather than it being a pain-relieving requirement to elevate a sore body.

The whole fleet then proceeded up to the clubhouse where we had a chalk talk, with the top 3 boats sharing what they did to be fast.    I took notes and boy, did the tips help!  On the 2nd day I spent a few minutes tuning, and started the day off with a 3rd (2 boat lengths from 2nd).  The 2nd race the wind softened and then died and I was not yet confident to adjust the rig on the water.  Not sure it would have really helped as we got stuck in a hole and did not make the time limit for the finish.

The third day, the breeze started off in the low teens but was diminishing rapidly.  I was feeling so comfortable in the boat, I had no problem dropping the main and adjusting the rig on the water it took all of 3 minutes.  After going to the wrong side of the course we were able to grind back to 4th by the first mark.  The wind was around 7 knots and dying. We were able to sail a little lower then the lead pack, and had learned how to best place our weight during the chalk talk the night before.  We rounded the leeward mark in 2nd.  The last beat was a battle between Donnie Brennan, Brian Bennett and us to see who would win the last race.  On last 3rd of the final beat we were able to get into a puff and extend on Brian enough to win the Race!    It was a good thing too as that 1st help us win a tie breaker and get a trophy.  I have never been in a 3-day regatta where there was a 4-way tie for first and another tie between 5th and 6th.  What a way to end a championship!  Oh, by the way, after the tally, Dave Reich from Birmingham AL won the tiebreak over Potter/ Guggenheim from Savannah, Bennett (the builder) from Savannah, and Donnie Brennan from Mobile. Next stop: Mardi Gras Race Week – next week.

I am smitten with the boat.  The boat is a rocketship that sails well in 5 knots  or 25 knots without beating you up.  The people in the Class are great.  The boat can be sailed with 2 or 3 people with a weight range of 340-460 and still be competitive.

Unlike most blind dates, I can really see this “girl” in my future.  As scary as commitment is to any single guy, I’m ready to find a way to bring her home.

welcome to the revolution