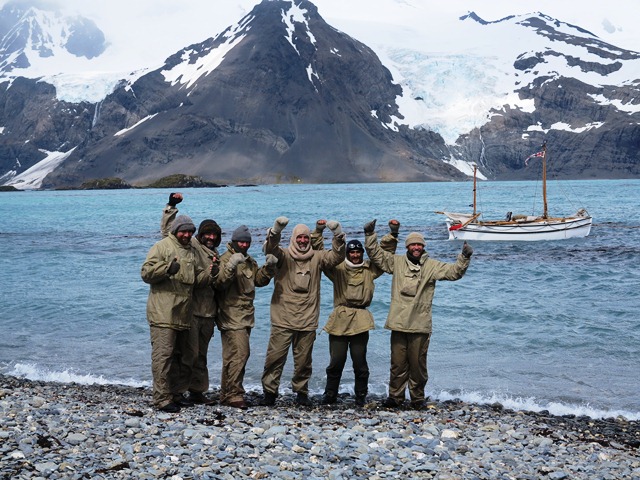 Six heavily bearded, exhausted but jubilant adventurers took advantage of 15-20 knot winds and a 2 metre swell to help land their boat, Alexandra Shackleton on the beach at Peggotty Bluff, South Georgia island, at 15.30GMT/UTC 03 February or 02.30amAEDT 04 February this morning – the same location where Sir Ernest Shackleton and his men landed the James Caird nearly 100 years ago.

The intrepid crew of British and Australian adventurers have made it successfully through Leg One of the historic re-enactment of Shackleton’s voyage of 1916. It took them just 12 days to sail the 800 nautical miles from Elephant Island. Now, three of them, expedition leader Tim Jarvis, mountaineer Barry Gray and cameraman/mountaineer Ed Wardle will prepare to climb across its mountainous, crevassed interior to reach the whaling station at Stromness – just like Shackleton, Worsley and Crean did in 1916. Read on.

what gray boat is it?