Mike Golding may not have the XL model of eco-Open 60 like Bubi Sanso, but he’s way ahead of the Spaniard without using much – if any – diesel on his trip.  Here’s a nice, in-depth piece with long time IMOCA boat captain Graham ‘Gringo’ Tourell on just how Golding’s alternate power systems work, their benefits and vulnerabilities, and more.  Gringo’s got five Vendees under his belt as a shore crew, so when he talks, we listen.  This piece from the excellent Mike Golding site. 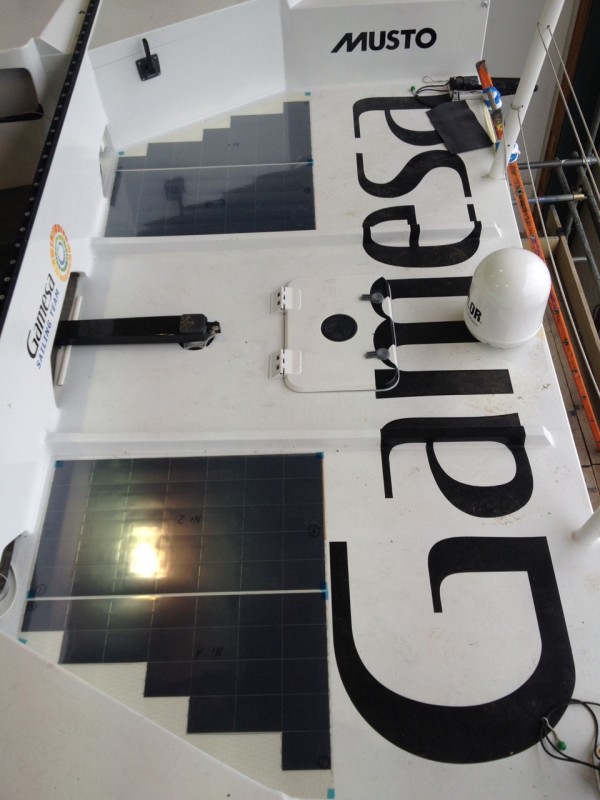 When did you start looking at these energy sources and actually adopt them on Gamesa?

We started looking more closely at hydrogenerators after the Barcelona World Race. Feedback from the boats that had used hydrogenerators during that race was very positive indeed.

Prior to that I had actually spent some time talking to JC who was Yannick Bestaven’s boat captain during the last Vendée Globe.  Yannick’s sponsor, Aquarelle, is the main developer and manufacturer of hydrogenerators and they were building prototypes for his boat. Yannick had already done the Quebec-St Malo without running his engine at all. While we knew they were a massive bonus, they were relatively unproven in terms of sea miles.

For our project, we decided to install them for the Transat Jacques Vabre [2011] but to be fair we did not get a lot of information from the TJV or the Transat BtoB because one of the hydrogenerators got swiped off the back of the boat and smashed and the other one packed up. What that did tell us was that we should refine the periods that we put them up and down.

When can they be used?

On Gamesa, we put them up and down at the same time as the trim tab, which is down at around 8 kts of boat speed and up at around 16-17kts. You could keep them down for longer, but if you hit any debris there is no question that you would lose or seriously damage them. Below 8 knots creates too much drag which is also why we bring the trim tab up at slow speeds.

Our experience in the TJV showed us that we needed to beef up the cassettes so that they are capable of impact with weed. Even though it does not seem like it, the drag is ridiculous when you hit weed, especially at 15kts. Since the B2B we have done a reasonable amount of testing with them and the power output of hydrogenerators is pretty staggering.

How much power do the hydros deliver?

On Gamesa, we can get 42 amps at 16 kts. This creates a lot of power; more than double what we would be drawing on a typical day. In the South we use the most power with the heating and computers on a lot of the time. By producing twice as much power as we need, we can positively charge the batteries. We generally run the batteries down to 15 or 20 per cent and then charge them up to 90 per cent. In the Vendée Globe we plan to have the hydrogenerators running for around six hours a day and that basically runs the boat for you.

Could you, or would you go with just hydros and solar panels on this race?

For the whole of the Vendée Globe it is a punchy call. You know the risks, weed, debris, whales, ice, all more than capable of destroying everything including the hydros.
Our view is we don’t think you can survive solely on hydros for the entire Vendée Globe. They are susceptible to damage because they are hanging underneath the boat and can be damaged by weed, debris etc. If our hydros make it half way around the world they have done enough and Mike can generate power to finish the race with the fuel he has and the solar panels.

Our priority is never to sacrifice safety and in The South we always have the radar on to detect ice. If you need to start cutting power then the radar is something that is a big draw. After that you are talking about turning your satcomms off. Then dampening down the pilot response, which in The South you just don’t want to do.

How much diesel are most boats carrying?

Yannick Bestaven was in Les Sables d’Olonne and he said that most of the boats carrying his systems were carrying between 50 and 100 litres of fuel. We have got more, only because we suffered with losing one [hydrogenerator] and damaging one in the TJV and B2B.

And the Solar panels were a bit of an afterthought, a belt and braces option but they have been good too?

We put on the solar panels because they are light and they are doing much better than we ever expected. On a good day they are producing 15-16 amps which means in The Tropics when you need about 10-12 amps to run the pilot, the computer, the B&G electronics etc, they can run the boat. That is a massive benefit because you save the drag from the hydros.
The solar panels of old were reliant on direct sunlight, but these just need light. If you stand over them they still produce power from the ambient light. With the old systems even the shadow of a control line over the cells meant they would not work, which is why we stopped using them. So for the Vendée Globe, the panels are proving their worth nicely. Once Mike has passed Cape Horn, he will probably be getting eight hours per day of ‘free’ power.

And how do the hydros actually work?

In effect it is a drive leg which is deployed on a pivot. It has a small propeller on the end, about 130mm in diameter. The system weighs about 20kgs and then there is the pipework and the cables and the converter box which regulates and transfers the power from the unit into the battery pack. There is a hydraulic unit which changes the pitch of the propellers. The reason for this is that at lower speeds it creates more resistance; by changing the blade pitch, it produces more power. Correspondingly at high speeds it feathers the blades aft and reduces the resistance, but it gives a higher top speed.

What are the downsides?

The downsides are drag. It is hard to measure the actual figures because there are so many variables in terms of sea state, wind changes and so on. But in the tank and according to the modelling which has been done it is approximately 4% of drag. So if you are doing 10kts it will be slowing you 0.4 of a knot. It is not really significant until you are in lower boat speeds. That is the theoretical model but on the back of an Open 60 there will be less drag because the water is already aerated by the influence of the keelbox, the daggerboard cassettes and the turbulence from inboard of the rudders so the drag will be less than that. They are as close to the rudders as possible so the rudders in part shield them.

They are vulnerable, though, as has been seen by Alex [Thomson on Hugo Boss], which could leave you open to not finishing a race, depending on how much fuel you carry. We have saved quarter of a tonne minimum on what we had on the last Vendée Globe and we could have gone lighter. While we have saved 250 litres, we suspect we are still carrying more fuel than the boats around and ahead of us.

Merf Owen did a model based on carrying 100 kilos of fuel which equated to less than half an hour’s time difference between Les Sables d’Olonne and Cape Horn. So we decided to take the extra and if we are in good shape in The South then we can use it for heat, which is a big benefit.