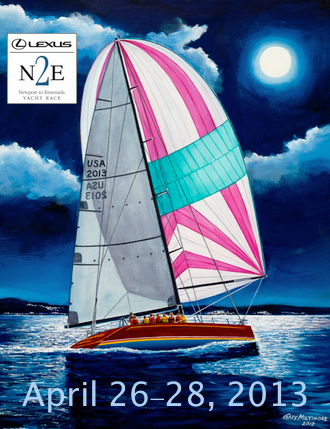 Do you like history?  The Newport to Ensenada race has a lot of history.   Every trophy is a record of this race’s history.   N2E has a lot of trophies.   There are trophies for: top finishers  in each class on corrected time, best first time racer, best all-female crew, best multi-mast mono, best double-handed mono,  worst finish, and a variety of other categories.   One of my favorites is the NOSA trophy for the fastest boat overall (aka line honors, aka fastest elapsed time). History is part of what makes N2E great.   I don’t know of any other races with this kind of continuity, with trophies with winners going back into the 50’s.  Looking at these trophies fills me with awe.

I am doing the same race as some guy 60 years ago, before I was born.  I might get my name on the same trophy.   Celebrities add a lot of fun to N2E’s history.  We have movie stars, sailing rock stars and famous boats.   You might get to share a trophy with one of them.  It’s kind of special. Glancing over the NOSA trophy names, it is easy to spot the famous among the not-so famous.  It is hard not to notice that there are a lot of multihulls listed.   I don’t have room to list them all, just the highlights.   Warren Seaman was fastest in 1955 on Tokerau.   Neither a catamaran nor a trimaran, Tokerau was a proa, inspired by the outrigger canoes of Hawaii.   Warren was part of CSK, a pioneering multihull design firm in SoCal.   His partner, Rudy Choy, is credited with many early fast catamaran designs and was fastest on Imua in 1963 & 1964, as well as in 1985, 1987, and 1988 on Aikane X5.    James Arness was fastest in 1968 on his catamaran Sea Smoke.   James is better known as Marshall Matt Dillon on the old TV show Gunsmoke.  Michael Kane was fastest in 1972 on Hurry Kane and in 1980 on Crusader, a 55’ trimaran.   Michael went on to some fame setting the 1980 Singlehanded Transpac record and later chasing the Flying Cloud record from New York to San Francisco.   Steve Fossett was fastest in 1995 and 1997 on Lakota, an ORMA 60 trimaran, and in 1998 on Stars and Stripes, the 1988 America’s Cup catamaran.

But it was 1975 before a mono finished first, the famous Ragtime.   Was she the first ULDB?  She was also fastest in 1977, both skippered by a Mr.  White.   In 1982 it was none other than the famous Merlin that beat the multis, skippered by P.  McEachern, B.  Gardner, and H.  Schofield.   In 1985 it was Fred Preiss on Christine.   Then we have Roy, as in Roy Disney, fastest in 1999, 2001 on the old Pyewacket, and in 2006 on new Pyewacket.   Mike Cambell &Stephen Williams were fastest on Peligroso in 2005.   Doug Baker was fastest on Magnitude 80 in 2007 & 2008.  Tom Holthus and Bad Pak were fastest in 2012.    I’ll bet you recognize some of these names. 2013 is your next chance to come out and be part of N2E history.   You don’t have to have the fastest boat to have a great time.   The joy of sailing, the challenge of racing, the parties, Ensenada, and the camaraderie of fellow racers will provide the great time.   Having a great time is all it takes to be a winner.