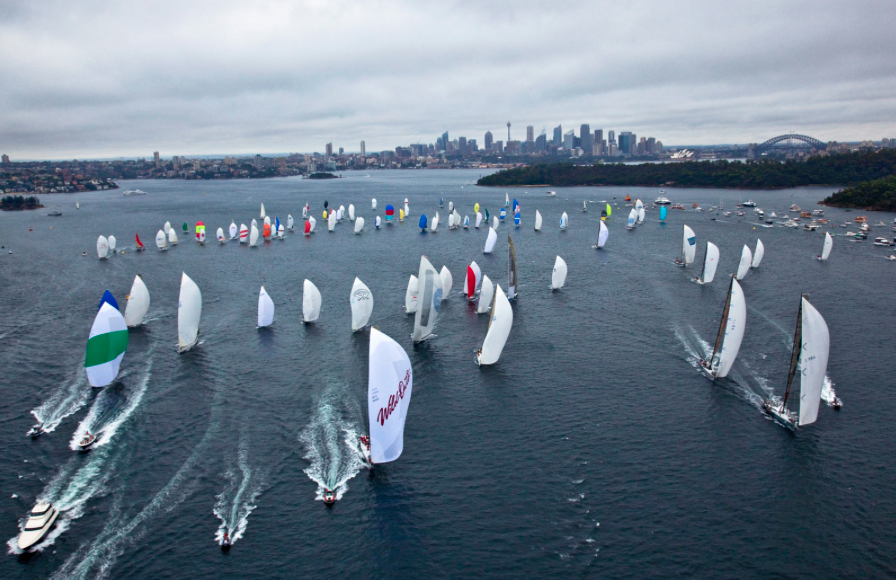 Most of the year, we hate the fact that Australia is so many time zones away.  It makes interviews hard to schedule and airfare massively expensive, and generally serves to cut us off from the Aussies in the city with more Sailing Anarchists than any other: Sydney.

But one day a year, we love it, because the time difference means we get to watch the start of the Rolex Sydney Hobart race on Christmas.  We’re already laying around on the couch, we’ve got friends and family around to share the experience; what better way to spend a couple of hours in between shots of eggnog, binging on bird meat, and fighting with parents/in-laws/siblings?

THE GUIDE TO THE DAY

Hobart organizers are notoriously bad at conveying the ‘feel’ of this race to the public, and their years of organizing stories and video with Channel 7 producers has led to the perception that the race is one for big boats only.  Fortunately the continuing growth of social platforms has forced the RSH to do a better job of informing the fans, while a few new options should make this Hobart start perhaps the best-covered in history for those outside New South Wales.

PRINT:  First off, we’ll send you to the Sydney Hobart thread; as usual, the overeducated fans in Sailing Anarchy’s forums will be analyzing the weather, the fleet, and the tracker to help you figure out what the hell is going on.  Check it out now.  Also, get on the Hobart Twitter feed to get the little stories and pics that race staff are uploading sporadically.

One place you’ll want to bookmark is the official entry list, with each yacht name hyperlinked to a fact sheet and photo of the competing boat.

RADIO: Next, you’ll want to open up the SailingChix With Nix live radio feed starting at 10 PM GMT/5 PM Eastern Standard Time/2 PM PST on Christmas Day.  Nicole, Mel, and Nix will be going for something like 5 full hours from their HQ high in Tania Park, while one of the girls will be down on a start boat for the actual start.  We’re told to expect plenty of great guests along with some super-secret insider info that should make the race a heck of a lot more fun to follow, so keep this feed going even when you are watching the video of the start.  More info is in the sailingchix thread, and the live feed is here, or you can download the mobile app here.

VIDEO:  Starting at 12:30 local/0130 GMT on the 26th and 2030 EST/1730 PM PST on Christmas, you’ll want to check out the 90-minute, high-gloss live video stream of the start on the official Yahoo!7 Live feed here.  If you have a problem with it, you may be able to find the live feed on the official Race page.

TRACKER: We’re told the very stale, unchanged-for-years tracker for the race has been redesigned, though it isn’t quite live yet so we’ll reserve our comments for later.  Either way, you can find it here.

BETTING:  If your country lets you place a bet on yacht racing, you can do so here.

rollin' with the new