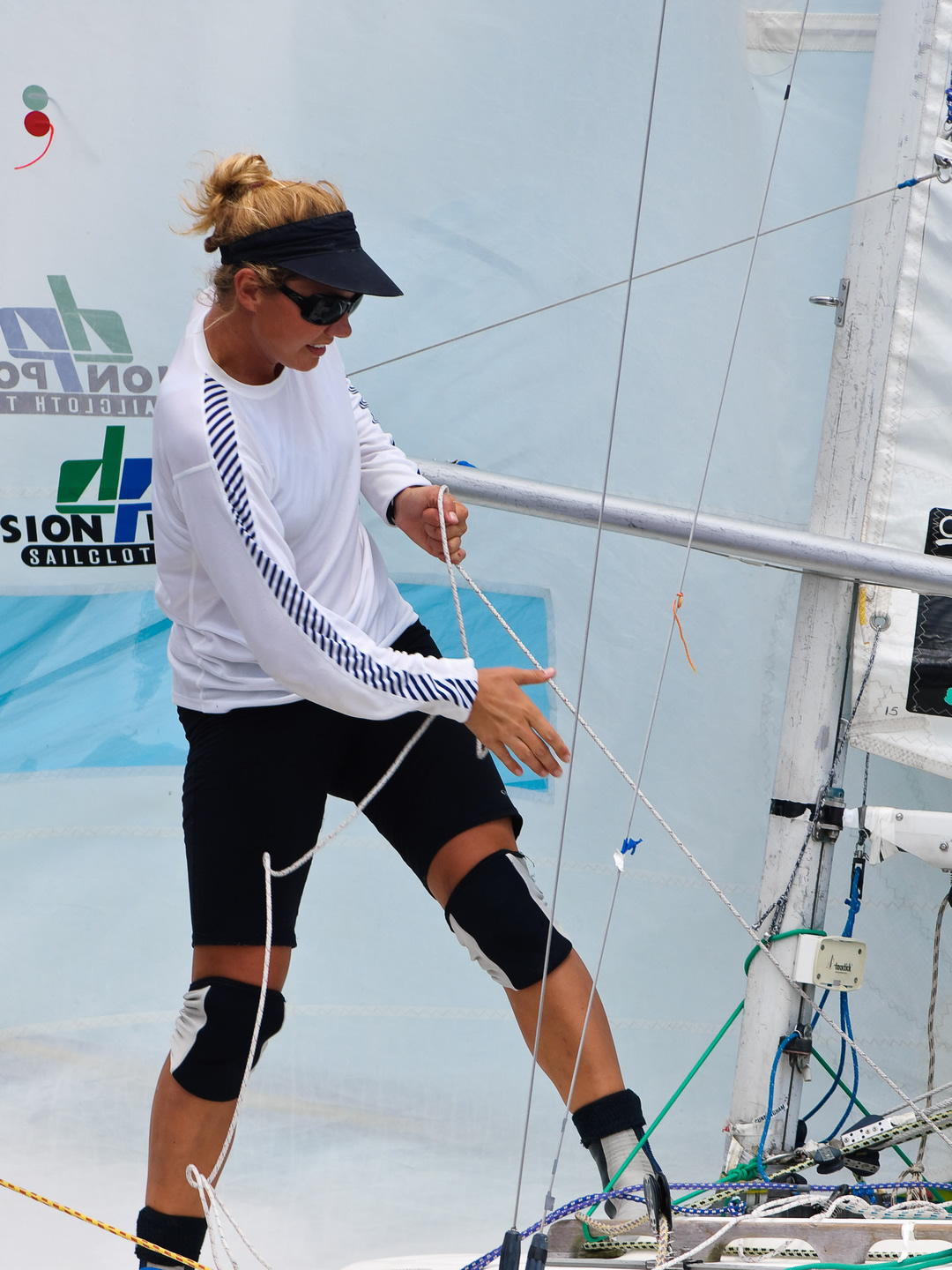 This week’s Sailor Chick of the Week is almost six feet of blonde ambition – St. Mary’s All-American racer Jen Chamberlain, who joins SA favorite Genny Tulloch on her Olympic hopeful match racing team.  We’ve got big hopes for Team Tulloch – there simply isn’t a smarter female skipper in the game today, and if she can conquer her other demons and put a great team around her, this one’s headed for Gold.  Here you see a Fried Elliot shot of Jen Chamberlain on the bow at Santa Maria Cup two weeks ago.  And here’s a report from Genny:

With 3 big events in the last two months, we’ve moved up for the first time to the top ten in the ISAF World Match Race Rankings! (link here). After a very close silver at Santa Maria Cup, and a bronze at NYYC, we are now ranked 9th in the ISAF Women’s MR World Rankings and have received an invite this week to the 2010 Women’s Match Racing World Championships to be held at NYYC in the fall.  But a month away from the Elliotts, racing instead in Sonars and J22s, meant it was time to get back into the boats to practice for our next World Cup event: Kiel Week, which starts this Friday.

We spent the last 5 days training in the Elliotts at the Chicago Match Race Center, and it was great for Alice and I to get back into the Elliott and to welcome a new teammate, Jen Chamberlain, to the middle of the boat.  Jen was an All-American Crew at St. Mary’s College, where she helped the team to win each of the three spring nationals championships (women’s, team racing and coed) during her collegiate sailing career. Last year she led their team as a captain to win the Coed National Championship in San Francisco, famously taking the tiller to cross the line in a massive lead in the last B-division race, taking the race and regatta. Jenn is an instructor at Annapolis Yacht Club and, after spending a little time last year in the 470, she’s now getting into the match racing field.  Her learning curve is tremendous and we are very happy to have Jenn on the team for Kiel Week! We’ve had a great week of practice here in Chicago with USSTAG teammates Anna Tunnicliffe, Debbie Capozzi, and Molly Vandemoer, as well as coach Dave Perry.  With varying wind and water conditions throughout the week, we got a lot of quality practice in. We worked on match racing situations against Anna’s team and boathandling in everything from 22 kts and flat water to 2-4 kts and big chop.  We feel much more confident in our teamwork now and look forward to flying out to Germany tomorrow! You can follow the racing at Kiel week on the regatta website.

We’d like to thank coach Dave and USSTAG; Chicago Match Race Center for providing their great training facility, tons of volunteers, and for letting us play on the Tom 28s with their members; and especially would like to thank Lindsey Duda for housing our team in Chicago.